While fighting may come naturally to some, to others it’s an intense battleground they’d rather steer clear of. One of the biggest problems with arguing with your partner is that there’s no referee, and no one there to say, “Whoa, that one was below the belt!” Instead, you’re left with emotions on high-alert, and all the potential in the world to say things that will land you in the doghouse for weeks to come.

Things to avoid and keeping a clear head

So what’s too much, and is there a “right” way to fight? One thing to keep in mind is respect. While it isn’t always easy to show respect when you want to tear someone’s face off *figuratively, of course* it is essential to maintaining a loving relationship—even in the midst of an all-out war.

How do you freshen up on the rules of relationship show-downs? We’re here to help. These are some of the absolute worst things you can say during an argument. [Read: How to fight fair in a relationship and come closer]

#1 We’re done. Feeling unwanted and disrespected is unbearable in a relationship. The threat of “It’s over!” or “Fine, maybe we should break up!” accomplishes both. Sure, you’re mad. But you’re not a 16 year old girl anymore. If you’re super serious about this relationship, you should probably leave the empty “breakup” threats where they belong: in high school.

Either you love this person and you want to work it out, or you don’t. Don’t pull the bitch card and pretend you’re done with your relationship if it’s really only a ploy to hurt your partner. If you feel like your partner isn’t taking you seriously, throwing empty threats around isn’t going to help. [Read: 10 things a girl should never say to a guy, ever!]

#2 Your penis is: insert insult. Do you have certain thoughts or feelings regarding your man’s dick? If so, telling him about it during an argument *especially if you’re losing* is so low, you should win an award! Relaying your negative feelings about your partner’s penis size is a *big* no-no. This is something you can’t take back, whether your sentiments are honest or not. If they are honest, well, then he’s always going to know that his junk was too small for you.

If you’re just pretending to experience dissatisfaction with the size of his member then… well… you’re a jerk! Harsh, but true. Besides, if you’re fighting about how the other partner doesn’t help out enough around the house, how could you possibly slip in, “Plus, your penis size totally isn’t doing it for me, like ever!” into a conversation and still be taken seriously? Impossible! As you argue, stick to relevant topics and avoid pointless insults.

#3 “You’re fat,” and other body insults. Much like the male penis size, the female body size is not something that should be picked on, mocked, or insulted—EVER—let alone when you’re in a fight! If you know your girlfriend really well, then you likely know her insecurities. Indeed, you probably know exactly what area you could target that would both hurt her feelings and make her question her self-worth all at once.

Much like making comments about penis size, telling your girlfriend how you really feel about her body—or poking fun at her weight or insecurities—is something you can’t take back. Trust us, you’ll spend years trying to restore the self-esteem you tore down in a single comment. Even if you have a totally legitimate reason for being pissed at your girl, leave her body and her looks out of it. [Read: 21 things a man should never say to his woman]

#4 You can’t satisfy me. When you’re in a fight, especially if it’s not on topic, the last thing you should do is bring up any sexual issues you’ve been having. Whether you’ve been faking it, you think your partner is no good in the sack, he doesn’t last long enough, she lasts too long, oral is a bummer, you want to do something kinky and they don’t—whatever! Whatever it is that you’ve been stowing away in the back of your mind, keep it there!

Bringing up sexual dissatisfactions while you’re already in the middle of a heated argument is just a recipe for hurt feelings… oh yeah, and disaster! If you’re feeling frustrated about a sexual matter, save it for a more appropriate time and place and address the issue kindly. [Read: 8 things you need to remind yourself when you’re arguing with your lover]

#5 Remember when… Let’s say that your partner cheated on you in the past, revealed a personal secret, or said something really insensitive after a few too many Jell-o shots. Whatever the situation, if your partner wronged you in the past and you have since forgiven them, don’t use a new argument to dredge up past mistakes.

When you forgive someone, it means you stop blaming them for their wrongdoing and have absolved them of their mistakes. True forgiveness means letting go of the past and moving on for the sake of both parties. Once you forgive, keep it that way, because you never know when your partner may return the favor of using a past indiscretion against you. [Read: 10 deadly phrases a guy must never utter around his girl]

#6 Just relax! This one goes for all the men out there *but certainly applies to women, as well*. If you are in the middle of an argument with your sweetie pie, NEVER tell them to “Just relax.” As ridiculous as it may sound and even if your partner is screaming their head off at you, we can almost guarantee your situation will be 5 times worse after you’ve told your lover to relax.

Arguing is about stress-relief, getting worries off of your chest, and resolving issues. Telling your mate to relax while they’re trying to air out relationship issues that upset them is like poking the beast—and don’t you know you should never, ever poke the beast?

One of the best things you can do while engaging in an argument is to stay on topic; don’t start throwing out words that you can’t take back, and hey—accept a little responsibility! It takes two to argue, and occasionally being the one to say, “Hey, I’m a bit of a jerk, too. Let’s start over?” will go a long way when it comes to arguing, both now and in the future.

[Read: A healthy relationship argument – 23 do’s and don’ts to remember]

Avoid saying the 6 phrases above in an argument, and you will be well on your way toward having a mature, productive conversation. Do you have any pro-tips for arguing? If so, leave them in the comments below! 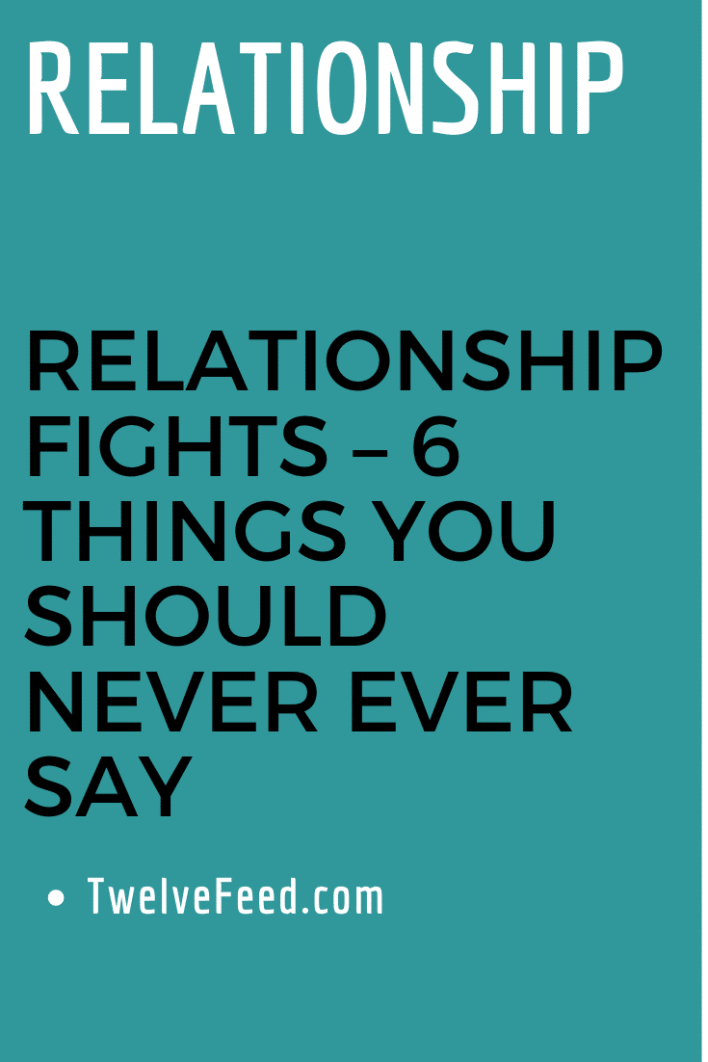 20 Signs You Should Break Up and Throw in the Towel