I’ve had numerous “book boyfriends” throughout the years. More than regular boyfriends, that’s for sure.

However, my fictional flings led to an unhealthy expectation for love and romance. After all, how could I be happy when real boys don’t even come close to comparing with Edward, Jace, or Cedric? As fun as it is to fall in love with fictional characters (and let’s be honest, we hold them very dear), it can be downright toxic to hold real boyfriends to the same standards. Book boyfriends set the bar high, and you can miss out on real love if you hold out for the type of romance you’ll only find in books.

Before we continue, I want you to think of one of your favorite book boyfriends (or girlfriends). I bet they follow some, if not all, of these patterns. Let’s take a look at them and see how they can create a toxic mentality for real-life dating.

Book boyfriends are usually rich or don’t have any real financial stresses. In most cases, it’s not a focus of the story. They have the funds they need to get by day-to-day. Their bills? Covered.

Real relationships, however, are impacted by money (or the lack of it). If anything, money is a point of contention for many relationships. If you live with your partner, then you’ve had a chat about finances at some point during the relationship.

Your book boyfriend is probably above the law.

Being above the law is not only convenient, but it adds s*x appeal. The authors know this. Sure, your book beau might get chased by the cops or arrested, but it usually works out in their favor. On the rare chances it doesn’t? You don’t feel it when they serve some prison time. Not the way you would feel it with a real man.

Real men and women are not above the law. In real life, jail time hurts. It takes a toll on families. A close friend of mine served a small jail sentence of six months, and it was difficult, so I can’t imagine my lover or boyfriend serving time. Yet, it happens to couples all over the world.

Real s*xual rejection is not portrayed with most book boyfriends. If anything, the protagonist wants to be with them! If she/he does reject him, it’s only temporary — it builds the s*xual tension and intrigue.

Your book boyfriend is probably a s*xgod.

Your book boyfriend is likely really skilled in the sack. There’s no awkward fumbling or unfinished business: it’s just hot, heavy, and steamy. They know right where to kiss and touch and tease.

Real boys aren’t going to be s*x gods. Real boys are going to fumble and need a little coaching sometimes. Real s*xis steamy, yes, but also silly and awkward and not always flawless — but that’s part of the fun.

Book boyfriends don’t fart or belch or do gross shit. But neither does the protagonist, so I mean…you know.

Real boys do all those things. But so do you, so don’t judge them too harshly.

As you can see, book boyfriends can be quite unrealistic. When we romanticize them to the extreme and create criteria for real-world dates based on them, we sabotage our happiness.

Now, I’m not saying we shouldn’t fall in love with characters! Please, for the sake of all that is good, have many book boyfriend and girlfriends. Enjoy your book partners of all gender expressions and s*xualities. Fall in love with them because they’re fantastic and funny and badass. Cherish them. But don’t hold real people to those standards. Don’t make dating harder than it already is.

No one can live up to book boyfriend standards, and that’s okay. Real boys will fart, or may need little guidance in the bedroom (hopefully not at the same time but it happens) … but real boys will also make you breakfast and cuddle you when you cry over a bad book boyfriend. 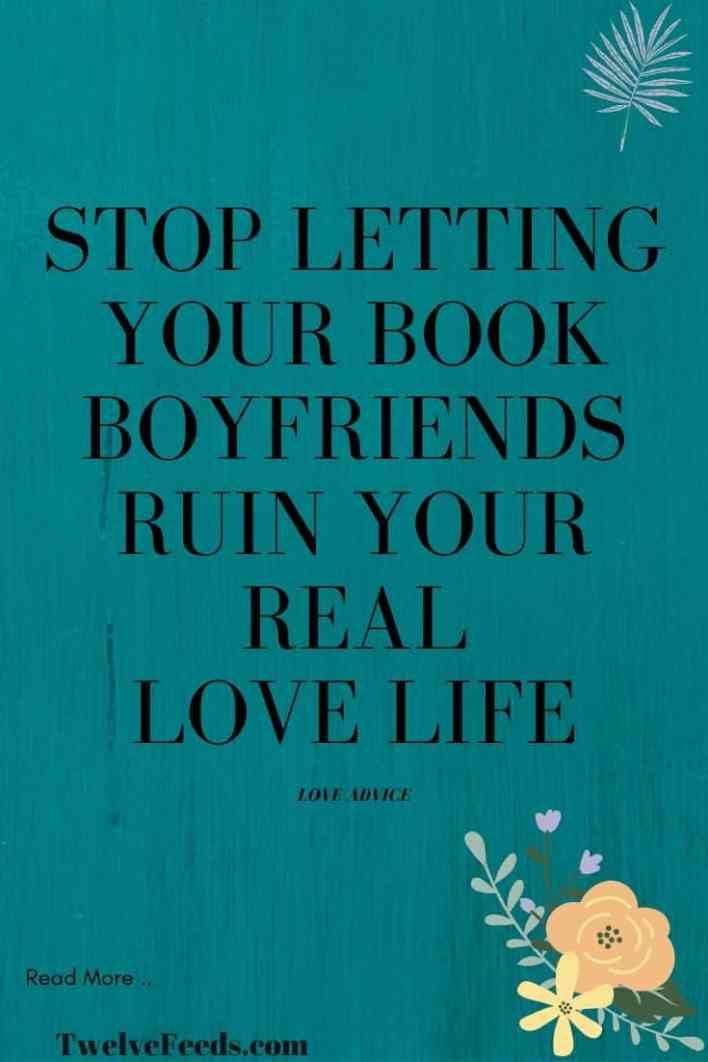