Some call it “bromance” or “bro-hood,” but only men understand the bond they share with their other Y-chromosomed brethren. It’s not the kind of relationship they have with girls or even with their own biological brother, but that unspoken and “no homo” kind of love between “bros.” Is it really a surprise there are bro code rules only guys know?

Brohood is a kind of bond that explains how bros get away with trading insults as a form of a greeting, get along despite all the dangerous and embarrassing pranks they pull on each other, and how they still share a beer and laugh immediately after a fist fight.

What is a bro and what is the bro code?

A bro is many things, but a bro is not an ordinary guy friend. Bros do a lot of things for and with their bros: good, bad, funny, or stupid.

The bro code is an unspoken set of rules that define what it is to be a bro and how a bro must act in the presence of other bros.

Bromandments – The 30 bro code rules all bros must follow

*Regarding bros and girls – these set of rules define the code of conduct between bros and their interactions with the opposite s*x.

#1 Bros before Hoes girls. This rule is the founding principle of being a bro and is said to have preceded even the concept of the bro code. This rule states that guys should put his bros in priority over the pursuit of the opposite s*x.

#2 A bro must have another bro’s back no matter what the circumstances are. A bro must be there for his bro in times of need be it financial difficulty, the pursuit of girls, fistfights, and drunken shenanigans.

#3 A bro’s immediate female family members are off-limits. This means a bro shall never lay hands on another bro’s sister or hot mother. However, he can comment on their level of attractiveness. Stepmoms and stepsisters are an exception.

#5 A bro shall not cock block another bro. Also the rule of “dibs.” If a bro liked a girl first, you serve as his wingman and not ruin his chances.

#6 Girls can be bros too. Bros must acknowledge girls with bro-like qualities. When a girl acts like a bro and follows the code, she is accorded equal protection and respect. Which means …

#7 Girl bros are off-limits too. A bro is not to make s*xual and passionate advances to a girl bro unless to tease her.

#8 If you catch a bro’s wife or girlfriend cheating on him, you inform him regardless of the consequences. Because rule number one.

#9 When a bro finds another bro’s girlfriend annoying or repulsive, he shall stay silent until the time they break up. Always respect your bro’s choices. Even if it doesn’t suit your preferences.

#10 When a bro’s girlfriend or wife calls you to ask for his whereabouts, you have no idea. Because rule number two.

#12 Bros do not give each other birthday cards.

#13 Bros do not accompany each other with clothes shopping.

#14 Bros are honor-bound to help another bro who is moving house or making DIY repairs.

#16 If a bro volunteers to do a food or alcohol run, he is entitled to claim the leftover change.

#18 A bro never rents a chick flick to watch alone. This must be done in the presence of his other bros.

#19 Bros never cry. Except when a family member or another bro dies or if they get “dirt” in their eyes.

#20 A bro shall not apply sunscreen to another bro.

#21 A bro must never reveal how many women another bro has slept with.

#22 A bro is not required to remember another bro’s birthday. *Nor does he fuss when his birthday was forgotten.*

#23 A bro must provide a condom to another bro in need.

#24 A bro must return the favor when another bro buys a round of drinks.

#25 A bro always leaves the toilet seat up for another bro.

#26 When a bro tells another bro a secret, he is obliged to take that secret to the grave.

#27 When a bro was not invited or was not able to attend another bro’s wedding, they don’t make a fuss about it.

#29 A bro must always order enough pizza for all his bros.

#30 A bro must not fuss when another bro doesn’t reply to his texts, calls, or emails. 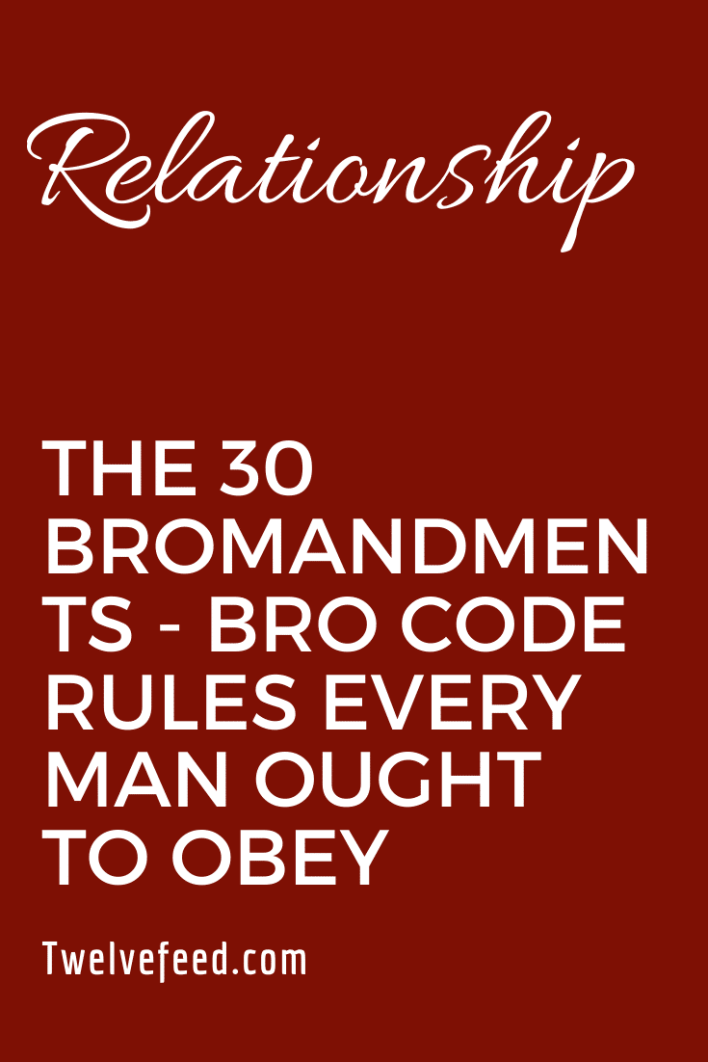 How to Pleasure Your Sweetheart - 10 Relocate To Drive Her Wild