Cheerleaders are known to be the golden girls—and boys—of every athletic half-time show, but they’re also believed to be the most popular and attractive individuals in high school. For that reason, the phrase “cheerleader effect” was coined. But it’s not what you think.

The effect is not something that gives you super flexibility, bouncy locks, or a peppy attitude. The cheerleader effect has a more sinister connotation—depending on how you look at it.

What is the cheerleader effect?

In scientific terms, the cheerleader effect is what you call “hierarchical encoding.” Drew Walker and Eward Vul from the Department of Psychology at the University of California, San Diego tested a theory to see if people found individuals more attractive when placed in a group.

They conducted five experiments wherein they made the subjects rate the attractiveness of people in photographs. They showed them a single photo, then proceeded to show the same photo while in a group or, for the purpose of this experiment, a collage.

All the results lead back to the subjects thinking that the people in the photos who were grouped were more attractive than those who stood alone. The researchers seem to think that people are more attractive in groups, because their physical attributes average out. The flaws of one person don’t have much weight when placed side-by-side with other people’s flaws.

There are no known experiments of the cheerleader effect in real-life settings, but many agree that they do find people in groups attractive. So, why is this happening? Why are people considered less attractive while alone than in a group?

Why does the cheerleader effect exist?

Each person has a different perception of what beauty and attractiveness are. That being said, you can rest easy knowing that what attracts us to other people is, in fact, a strange physical quirk. A ski-slope nose? Not everyone has that, so it’s a quirk. Norse god proportions *ahem, Chris Hemsworth*? Again, not everyone possesses those, so we can chalk it off as a quirk.

When you mesh those quirks with a group of other people’s quirks, the attractiveness factor evens out. This means that the flaws, which are not the quirks, are less noticeable because the number of people in the group make it difficult for others to see the flaws you’re so insecure about.

What does this mean for you?

Are you really less attractive when you’re alone? The answer: Of course not! We’re talking about outside perception, here. This is based on how strangers perceive you. It really has no bearing on who you are as a person.

You’re as attractive as you perceive yourself to be, so rounding up your friends on a daily basis isn’t necessarily the best option to boost your self-esteem. In terms of dating, however, it’s possible that you can use this information to your advantage.

The key to your dating problems?

Taking your friends out under the guise of a girls’ or boys’ night out might backfire, if you’re only in it to find a date for yourself. The cheerleader effect is not something that you can initiate on a whim. It’s a natural occurrence.

No matter who you’re with, the cheerleader effect takes place, because being with a group of people makes it difficult for others to assess your individual traits by just one look.

It’s not a way for you to put down your less attractive friends, nor is it a way to increase your chances of finding a date by hanging out with highly attractive people.

You are literally just a face in the crowd—which is not a bad thing, at all. The competition in terms of physical appearance evens out, and it takes the pressure off of trying to impress possible dates while sitting at a bar alone.

The cheerleader effect gives you an advantage when attempting to attract possible suitors, while also giving you much-needed support you can only get from your friends.

How to use the cheerleader effect to find a suitable date

Basically, the formula is this: when you’re out with your friends, you look more attractive.

But attracting someone is not a done deal. You’re simply more attractive than you would have been, had you been alone. That’s not even saying much, considering everyone can attract someone at some point in their lives.

So how can you attract a suitable mate using the cheerleader effect, aside from already being hotter than you are when you are alone?

#1 Don’t think too much about it. The cheerleader effect will happen when it happens. Setting yourself up with friends who you think are less attractive than you is just cruel, and a very obvious reflection of who you are as a person. Don’t do it. Putting down your friends, albeit in a subtle way, is never a good way to attract possible dates.

#2 Stop noticing how other people look at you. Even if you do seem more attractive with the cheerleader effect, other factors are still in play. If you look uncomfortable or antsy because you’re waiting for someone to notice you, it’s highly unlikely that someone will think you’re cute. Flaws are okay, but insecurity is unattractive. [Read: 13 physical attraction tips to look way hotter in public]

#3 Enjoy your time with your friends. In order for you to follow through with items number one and two, you need to remember why you’re out and who you’re with. You’re here to spend time with friends, while also putting yourself out there where possible suitors can see you. The main thing, however, is that you need to enjoy yourself, so you won’t be bothered by the idea that someone may or may not be interested in you.

#4 Revel in your newfound confidence. Knowing you look attractive takes you one step closer to being your best self. The key to attracting someone is being confident enough in your own skin. Men and women are more attracted to confident people, regardless of their appearance. So, with the cheerleader effect in place, a matching aura of confidence will *most likely* seal the deal for a budding romance. [Read: 10 subtle body language moves to appear more confident]

#5 Let someone else have a go at it. The cheerleader effect is not just for you. It’s for each and every person you decided to go out with. You’re not the only one who looks awesome tonight, which means that some of your friends might get a chance at love as well. If someone else gets a date first, don’t be bummed about it. Celebrate the fact that the cheerleader effect is working, and that it’ll be your turn soon.

#6 Entertain your new suitors, but don’t rely on your first impression toward each other. Not everyone who approaches you is a stellar guy/girl. Remember that they probably based their decision on physical appearance alone, so it’s best to take some time to get to know them better before deciding to start a relationship.

#7 Don’t forget your friends. Once someone approaches you, don’t just leave your friends hanging. It wouldn’t hurt for you and your new suitor to have a few more drinks with your friends, instead of just rushing out to get to know each other a little better. *wink wink*

#8 Remember: however you were perceived at first glance is how they will remember your first meeting. The cheerleader effect lasts only as long as you’re in a group, but don’t fret. The way your date saw you that night with your friends is how he or she will remember it for the rest of your lives. That’s how you’ve always looked, anyway; the cheerleader effect just helped you get a leg up in a huge sea of other single and potential “cheerleaders.” 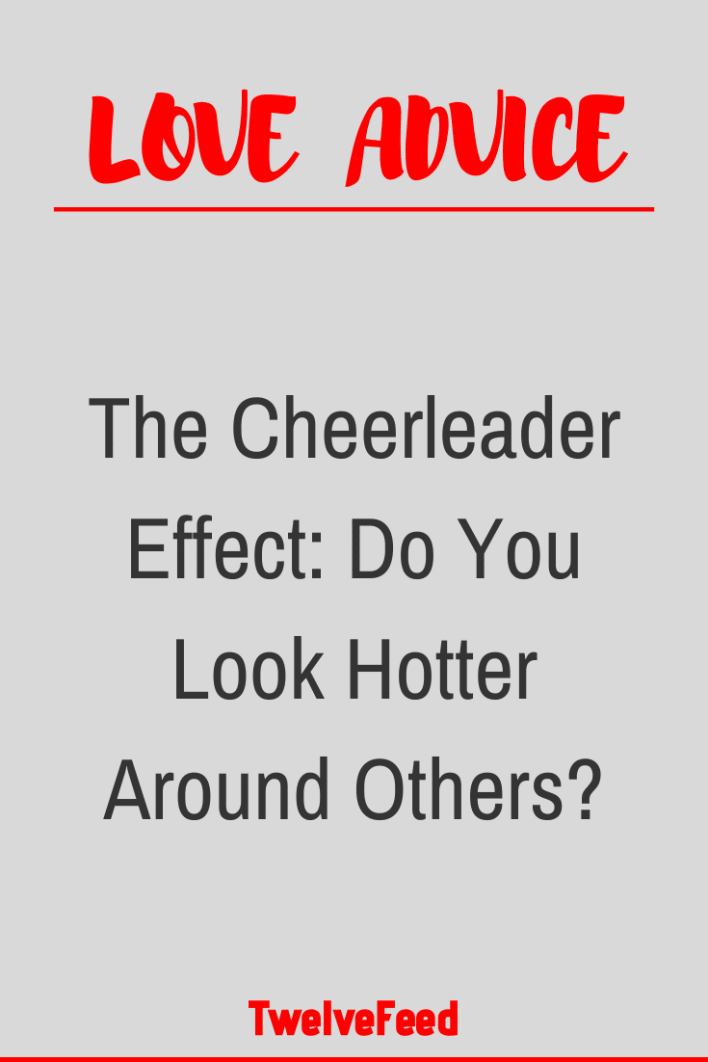 17 Things to Do Before Getting Married and Settling Down