Aries: When they do their best to keep the passion alive, but it doesn’t help.

You aren’t one to lie down when there is an issue- in your life or your relationship. Although everyone goes through their ups and downs, it doesn’t mean the relationship is unsalvageable. When things seem to be coming to a standstill, and Aries is likely trying to keep the passion alive. Whether it be romantic grand gestures, going out of their way to spend time with their partner, or change things up intimately, they aren’t afraid to pull out all the stops. Yet when they do everything they can and things still don’t change, they know in their heart that is the end.

Taurus: When their partner is dishonest with them.

Taureans are compassionate and nurturing, as well as stubborn. They take a long time to build trust with a partner, and they expect that to be upheld. They may be able to forgive their partner once or twice for lying because they care deeply and have invested a lot of time into things, but if they keep catching them in lies- there is no future for them.

Gemini: When they show all of their sides to someone and they judge them harshly.

Geminis tend to choose not settle down often, but when they do it’s because they’re incredibly invested. They feel safe and as if they can trust their partner with everything- including the sides of them that they don’t normally show to others. Though they are flexible, a Gemini knows their relationship is truly over when they show their partner a side of themselves that isn’t the most flattering, and they explode or judge them harshly. Their trust is shattered, and once that happens they know it’s time to let things go.

Cancer: When they pour out their heart and it’s met with indifference.

Cancers are not afraid to express their emotions- they wear their heart on their sleeve. They don’t necessarily need a partner to be as open as they are, but they do need someone to be able to communicate their feelings in some way. Despite how “good” things might look, a Cancer knows things are over when they pour our their heart and soul, and the other person acts as if they don’t really care. Cancers don’t ask for much, but they need to know they are loved- otherwise the relationship won’t get very far.

Leo: When their partner criticizes them constantly.

When a Leo decides to enter into a relationship, they are already aware of their worth and how they should be treated. They also recognize how great their partner is, and they look forward to a mutually supportive relationship. Despite that they know they have flaws and occasionally need constructive criticism, if their partner chooses to constantly try to tear them down or endlessly tell them what they’re doing wrong, they won’t be able to take much for long. They know the relationship is truly over when it’s clear their partner has no interest in ever building them up, but instead ripping them to shreds.

Virgo: When their partner refuses to listen to them.

It takes a Virgo awhile to open their hearts and minds to someone, so when they do it’s no small thing. They are great at pushing the other person to become a better version of themselves, and they have a strong knack for doing so. Part of them showing they care for someone is to pay attention and offer advice when necessary- but if their partner constantly seems to tune them out or ignore them altogether, it hurts them in a huge way. Eventually, the Virgo will decide to pull back and end the relationship, because it clearly can’t become anything if they don’t want to listen.

Libra: When they fight for the relationship, and the other person doesn’t care.

Libras are not the biggest fans of confrontation or conflict, so it’s no surprise that they tend to retreat when things start to feel out of hand. Yet when they are whole-heartedly devoted in a relationship, they are willing to set their uncomfortable feelings to the side and fight for the person they love. It’s no small move for them, so if they start to feel the relationship slipping and they give their all to make things work, their partner has to be willing to fight for it, too. Libras know the relationship is over when they fight for their love, and the other person doesn’t care or doesn’t act like it matters. If their partner can’t accept or understand how big of a deal this is, they aren’t going to be able to understand them. Period.

Scorpio: When their partner betrays them.

A Scorpio isn’t one to deny that they don’t easily enter into relationships. They love the intrigue. Excitement, and mystery of a new partner- but committing is another beast entirely. They have a hard time believing they can trust others, so they won’t choose a partner unless they somehow think this person can be trusted with everything. A Scorpio may be willing to stick by someone through mistakes because they understand no one is perfect, but if their partner betrays them and breaks their trust? The person is dead to them- and so is the relationship.

Sagittarius: When they start to feel like a smaller version of themselves.

Sagittarius individuals are open-minded and aren’t afraid to give people a chance, if they find them interesting and exciting. They have a thirst for adventure and they want to share that excitement and enthusiasm with someone they are crazy about. Yet not everyone necessarily shares that same desire, so if the Sagittarius starts to feel stifled or like they are just a smaller shell of who they want to be, they know this relationship has no hope of surviving. They know they need to be the best version of themselves, so whoever is dating them has to appreciate this, too.

Capricorn: When they do everything they can to make the relationship successful and it doesn’t help.

Dedicated, intense, and efficient- all characteristics of Capricorns in their lives as well as their relationships. They know that nothing works without putting in effort, so when they date someone they invest themselves in a big way. They don’t mind to put in the work as long as they know it will be appreciated- but that isn’t always the case. To a Capricorn, if something is wrong, they will take all the logical steps they know of to fix it. Yet if they do everything they can think of and things still aren’t working out, they know the relationship is fully over. They won’t stress too much about it because they know they’ve done all they can.

Aquarius: When their partner can’t respect their independence.

Choosing to date someone isn’t a common occurance for an Aquarius- they don’t mind being alone. They nonetheless enjoy the company and interactions of people they find complex and interesting, and when they decide to date someone, it comes with the expectation that they still have some independence to be themselves. Yet if their partner starts to become smothering, or gets upset that the Aquarius needs their space, the possibility of the relationship thriving is minimal. They know their relationship is over when their partner can’t respect that they need this time to be themselves because it’s integral to who they are.

Pisces: When they give all of themselves to someone but it’s only a one-way street.

Pisces are well-known romantics, and they have the potential to fall for just about anyone. They guard themselves to an extent, yet once they’ve set their heart on a person, they are all in without another thought. They have a tendency to give all of themselves to someone without asking for much in return- they want to prove their love and don’t want to be selfish. Yet when it starts to become obvious that they are the only one giving, and their partner is always taking, things can become a bit draining for them. A Pisces knows the relationship is over when it’s obvious that the relationship is completely one-sided. They are a human being who wants to be loved and taken care of, too, so if their partner refuses to do so it’s clear the relationship is doomed. 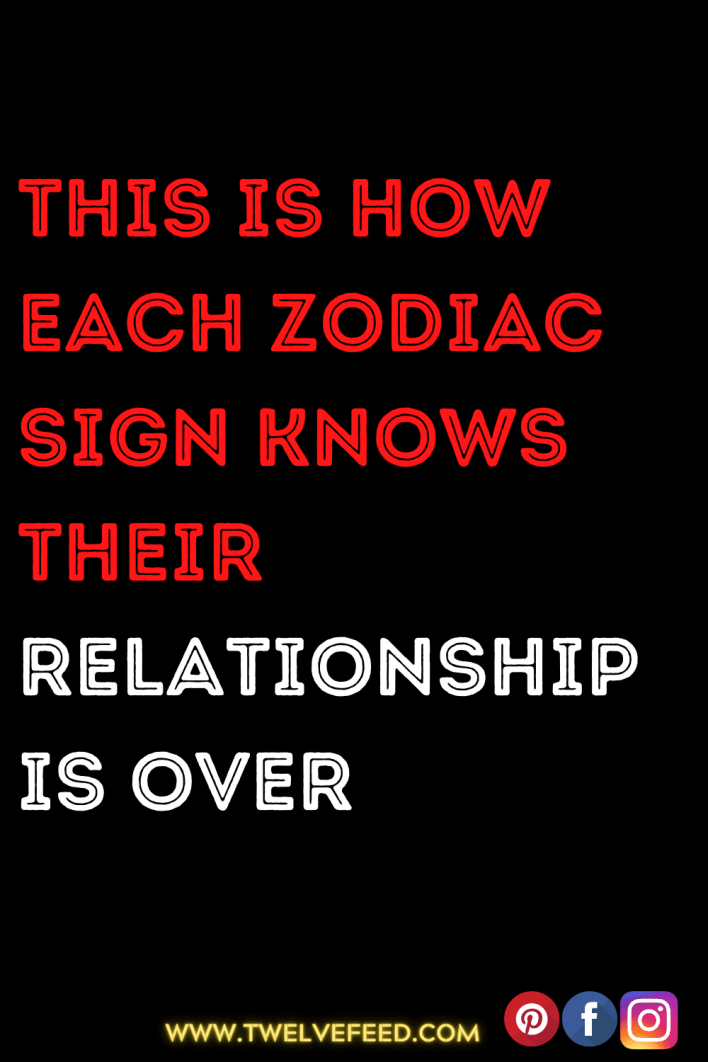 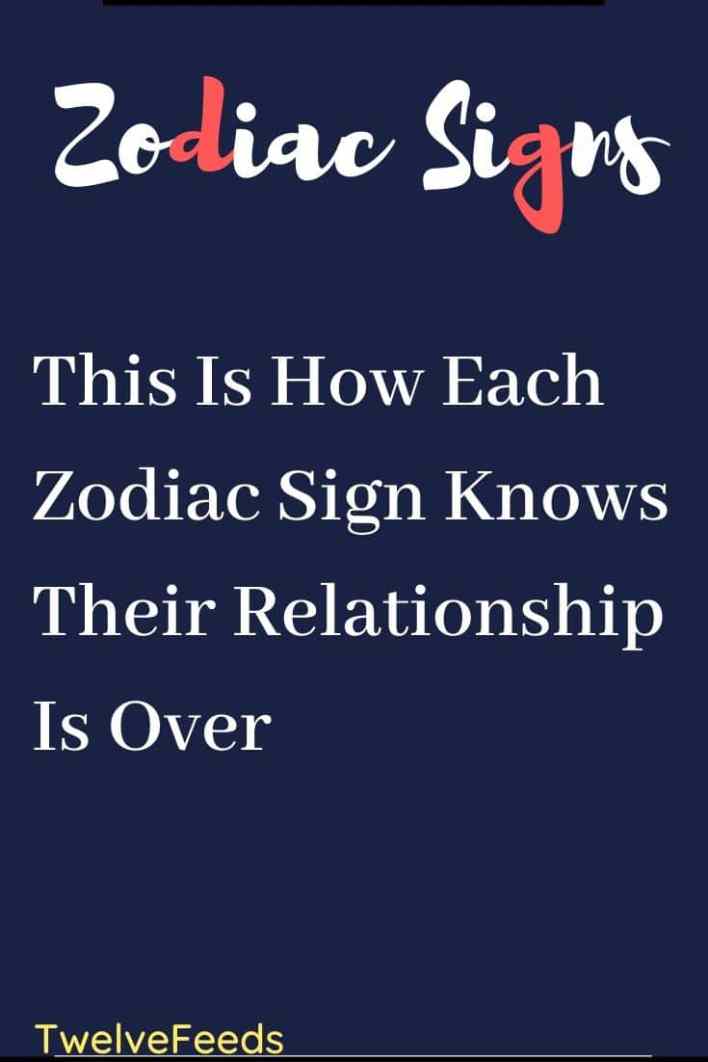 What Each Zodiac Has The Most Trouble With In Relationships