You get over an almost-relationship by saying ‘yes’ to everything. You’ve always found energy, joy, and comfort from trying new things, so the way that you slowly heal from the not-quite-significant-other who broke your heart is by taking all the time you used to spend with them and using it on things that actually make you feel happy and invigorated. From rock-climbing to book club to finally joining your friend at their insane workout class, you find closure from re-becoming the version of you that you love – the one who finds adventure in anything.

You get over an almost-relationship by cutting them out of your life 100%. The problem with almost-relationships is that the ‘breakup’ so to speak can be incredibly drawn out, fuzzy, and vague. When there’s no technical ‘relationship’ that needs to be broken up, it can often take weeks or even months to fully close the door. And that’s especially challenging for someone like you – you’re so warm and forgiving and understanding that you have a hard time saying ‘no’ if your ex-fling comes crawling back or wants to keep ‘this’ open (so that they have options.) The way that you spring back from an almost relationship is when you finally stop accepting their bullshit, fully cut them out of your life, and spend your energy on people who are more worth of your time. It is at once vindicating, invigorating, and freeing.

You get over an almost-relationship by doing what YOU want to do and by not catering to anyone else’s opinions.

Everybody wants to tell you what (in their mind) is the best way to get over someone. They want you to try certain things and behave a certain way and ‘heal’ by a certain time. Although you can be somewhat of a people pleaser, you get over your relationship by finally refusing to give a shit about what anyone else thinks. Once you stop worrying about everyone else and start worrying about what makes you happy and what brings you comfort, you finally pull yourself onto the path towards getting over them.

You get over an almost-relationship by getting your closure and then telling them to stop contacting you.

Your tendency to be emotional and sympathetic – though some of your best attributes – can make ‘breakups’ really difficult for you, especially ‘breakups’ of relationships that weren’t technically relationships. It can be difficult for you to let things go, so you end up moving on when you love yourself enough to demand the closure that you need – whether that’s a long talk or a couple of texts back and forth or a discussion over drinks over what went wrong. And as soon as you’ve received the information that you need, demanding that they leave you alone and don’t try to drag this out is the final ingredient you need to fully get over them and live your life without them.

You get over an almost-relationship by diving into things that are way more fulfilling to you than that person ever was.

Your creativity and your sense of excitement about life sometimes suffer when you’re in a relationship and/or talking to someone – especially someone who isn’t right for you. And the way that you get over the person who basically just ended up wasting a bunch of your time is by getting that time back – by jumping into a new project at work, taking on a new creative endeavor, or doing anything else that blossoms from the newfound energy you gained back from the person who was sucking it all away.

You get over an almost-relationship by finally putting yourself first.

You’re always worrying about yourself last – you’re always showing up for other people and being a loyal friend and a good advice-giver and fussing about everyone else’s problems while always being overly critical about your own. This is true with the person you’re kinda-sorta-whatever-seeing too. And the way that you get over them is by standing up for yourself, refusing to let them walk all over you, letting them deal with all their ridiculous problems, and using all your intelligence and diligence to take care of yourself and improve your own life instead.

You get over an almost-relationship by being vulnerable around your friends (for once).

It’s okay that you’re usually the light, easygoing, talks-to-everyone-at-the-party person. That’s part of who you are. But it’s also okay to need people, and to sometimes not be happy in front of them, and to ask them to help you get through it. Walking away from the whatever-it-was relationship that you were in actually ends up being very freeing for you, because while you were with that person, you felt like you had to always be the charming, relaxed person they were first attracted to and that you couldn’t go any deeper than that. Finally being away from them gives you the freedom to be a three-dimensional person who is sometimes outgoing and fun and light but who also sometimes just needs to have a damn heart-to-heart with someone who cares about them.

You get over an almost-relationship by refusing to make yourself feel small.

Your presence has always been powerful, notable, and magnetic. And often, when you’re ‘talking’ to someone, you’ve felt the pressure to make yourself seem smaller or less intimidating just to make them feel better about themselves. When you finally end the thing that was clearly making you feel unhappy and not like yourself, it’s so much easier for you to move on and stop feeling resentful when you instead focus all that vibrancy towards being ‘you’ again – collaborating with people, making new friends, succeeding at work, saying ‘yes’ to any social event you want to go to, etc.

You get over an almost-relationship by leaning fully into the ‘suck’ of the breakup and letting yourself fully work through it before bouncing back.

Just because you’re a very optimistic and carefree person doesn’t mean you have to be that way when your almost-relationship ends up fizzling out. Rather than trying to sweep your frustrations and your hurt feelings under the rug, the best thing for you is to fully address it, deal with the pain of what could have been in whatever way suits you (hibernating, ice cream, lots of walks, binging a show, etc), and then fully being able to let it go so that you can go back to feeling like yourself again – except ten times lighter now, without them weighing you down.

You get over an almost-relationship by talking it out with people you trust and then leaving it far, far behind you.

When this type of relationship disintegrates, you’re always tempted to be bitter and pessimistic afterwards – that makes you feel safer, more logical, and less likely to get hurt again. But those toxic thoughts just end up holding you back. You move on a lot faster when you talk through all the frustrating and upsetting parts of it with friends or family members that you trust – so that you can stop carrying the baggage, leave it and them behind you, and then move on to guaranteed bigger and better things.

You get over an almost-relationship by admitting to yourself that the other person hurt you.

For someone who’s always so calm, collected, and aloof, it’s difficult for you to admit when someone else has had such a strong effect on your emotions and even your happiness. But it’s also the way that you get over them – by leaning fully into how hurt you feel and going through the steps of a breakup (even if you didn’t feel like it was ever a ‘real relationship’). By giving yourself permission to be sad, to baby yourself a little bit, to talk things out with friends and family, and to do whatever else you would normally do after a ‘breakup’ you end up getting over your almost-relationship a lot faster.

You get over an almost-relationship by listening to your own instincts about how you’re going to move on from this.

People might have the best intentions, but when everyone is trying to chime in about how you should be handling things and/or how you should be feeling, you’re not going to get anywhere. Your best bet when you’re trying to move on from something like this is (graciously) telling everyone to back away and let you deal with this on your own. If you’re sad for a while, you’ll feel sad for a while. If you’re angry, you’ll feel angry. If you’re confused, you’ll feel confused and you’ll seek out the people or situations you need to help you get over it. You’re at your strongest when you remember that you can depend on and take care of yourself and that other people are there for you to lean on, but not to be carried by. 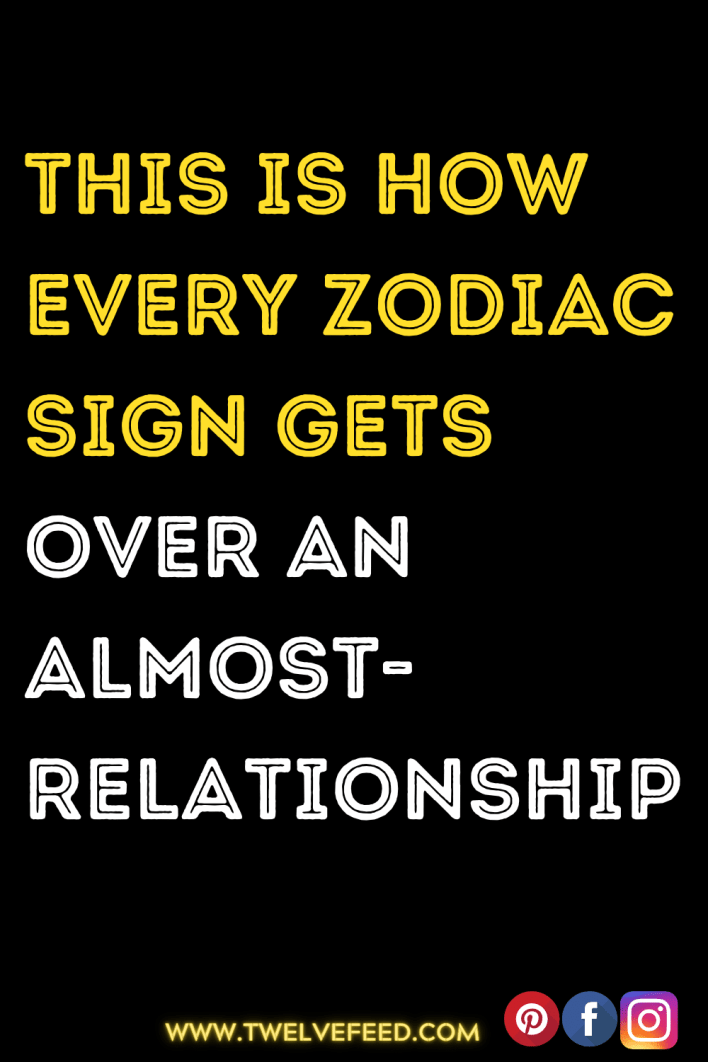 How Each Zodiac Sign Keeps You Around Without Committing To You