You have enough aggression and ambition to pursue something bigger than yourself. You will begin to change the world by learning from your adversities and turning them into a lifelong lesson. You are known not to have the most ideal upbringing, whether it was a loss of a loved one or simply being too young to have experienced situations that forced you to grow up sooner than expected. You are one of the few signs that are able to take those heartaches and turn it into something powerful. As an Aries, you’re strong enough to withstand the most destructive storms, brave enough to take as many risks as possible, and you’ve got enough guts to do what most of us won’t.

You will make your mark in the world by working hard at something and achieving it like a boss. You are at your happiest when you end up in a career that not only guarantees stability, but also one that’s able to provide for the ones closest to you. You guys are one of the most family-oriented signs in the zodiac, you show us how to appreciate our family members more, regardless of their personal baggage, you teach us loyalty to the ones who have been there from the start, and you show us the very source of where unconditional love comes from. Like Mother Teresa said, “If you want to change the world, go home and love your family.”

You are well-versed in what’s going on everywhere you turn. You’re a talker, a socialite, and are naturally a people person, whether you like it or not. As a Gemini, you are curious enough to become an outstanding journalist one day, you possess the right amount of awareness to make a difference toward a cause that may hit home for you, and you are social enough to know the right people at the right time. You will ultimately change the world by your level of attentiveness to people. Whether that would be toward your friends, your family, or a social cause, the fact that you will always be willing to listen to the stories they tell you, speaks volumes.

You’re able to inspire and lead a movement toward the concept of vulnerability at its strongest. You’ll deeply influence society by being brave enough to talk about the things everyone else is hesitant to even think about. As natural sensitive beings, all of you mostly had your feelings hurt at an early age. You’re one of the zodiac signs that is able to embrace your sensitive nature enough to become a superpower. As you get older and the world seems to get more practical, you realize that you’re human and it’s completely normal to react toward certain situations that may affect you uncomfortably. As a Cancer, you’re able to accept what the world perceives as a weakness and make it your strength, you’re realistic enough to understand that there will never be a shortage of bad days, but you’re also in tune with yourself in believing that you’ll get through it all.

You’re able to build an empire with the bricks thrown at you. You are the sign who can be heartbroken, humiliated, discriminated against, broke as hell, and still manage to end up doing really amazing things with your life. These kitty cats will make their mark by ending up in the most powerful and influential positions. There’s something about the way Leos face adversity that can’t ever really hurt their soul. There’s something about the way they handle pressure, criticism, and evidently when everything seems to be falling apart. Decisive, honesty is their best policy, and full-blown go-getters, you lionesses will ultimately change the world because you were always meant to.

You will influence this world by your undying work ethic. You’re the zodiac sign who can fail countless times and still find enough faith to continue in improving what you need to work on. Like your fellow earth signs, when it comes to your achievements, you’re highly focused on the work that needs to be mastered. But as a Virgo, you’re practical enough to always have a back up plan. You’re logical enough to accept setbacks, strategic enough to be aware of the obstacles to overcome, and realistic enough to understand that true success will never happen overnight. You guys will inevitably change the world by setting the greatest example of always being prepared for the worst.

You’re able to survive your worst times with enough belief that justice will one day be yours. You will impact this world by your efforts in making sure everything is fair. These air signs will make their mark by ending up in positions that uphold justice to the highest caliber. As a Libra, you’re smart enough to always listen to both sides of every story, you’re social enough to befriend everyone in the room, and you’re balanced enough to accept the good with the bad at all times. You guys will definitely change the world because you’re always standing up for the little guy.

You are known to become incredibly inspiring when you overcome your worst fears and doubts. You’re practical, hard-working, and career-driven with a secretly soft side. You will impact this world when you start believing in yourself. You’ll be an entirely different person. You won’t listen to your doubts, your fears will have nothing on you, and your long list of “what ifs” will all have answers beside them. These water signs are known to differ from Pisces and Cancer, therefore will end up in the same positions as powerful as Aries, Leo, and Capricorn combined. You guys will inevitably change the world because you show us how to transform our weaknesses into strengths.

You will make your mark in this world by displaying how much faith is needed during times of chaos. You are known as the most optimistic of the zodiac, the “daring adventurer”, and the spunkiest fire sign out of the bunch. You are at your happiest when you end up in a career that lets you do as you please, because that is when you excel the most. As a Sagittarius, you are not afraid of speaking your truth in order to convey what needs to be said and done, you are fearless in the face of people’s criticism and prejudice, and you don’t need to think twice when pursuing what you really want in this life.

You have enough knowledge of the economy and exactly what can be done to make it a better place. You are known to be at your happiest when you end up in a hard-earned position that not only speaks to your mind but your soul. You will touch this world by your ability to right its wrongs. As a Capricorn, you are well-informed in current events and you work hard enough to see everything you start to the end. Inevitably, you guys will change the world by not being afraid to witness its dark corners and doing something about it.

You will make your mark in this world through people. From caring about them, sincerely asking how their day is going, to intently listening to the story they’re telling you about how their grandparents met. You are an intellectual, an independent soul, and a free-spirited entity with a big heart. You are at your happiest when you end up in a career that makes a difference in people’s lives. Whether you end up in journalism, business, or even medical, if you are able to see the results of the work that you put in through a child’s smile or an elderly woman’s sigh of relief, you will always go to bed with the biggest smile on your face. You Aquarius will influence this world by your dedicated pursuance of always serving the ones who need it the most.

You will make your mark in this world by helping the ones who need the most emotional guidance. Whichever career path you may take, you will influence the ones who cross your path by leaving them better than you’ve found them. As a Pisces, you will always have everyone’s best interests at heart, your motives will never be malicious, and you are honestly one of the purest signs in the zodiac. Your line of work usually steers you toward non-profit organizations, performing arts, humanitarian relief work, or anything that helps the good of humanity. You will influence this world by making the ones who feel forgotten and lost feel seen and loved. 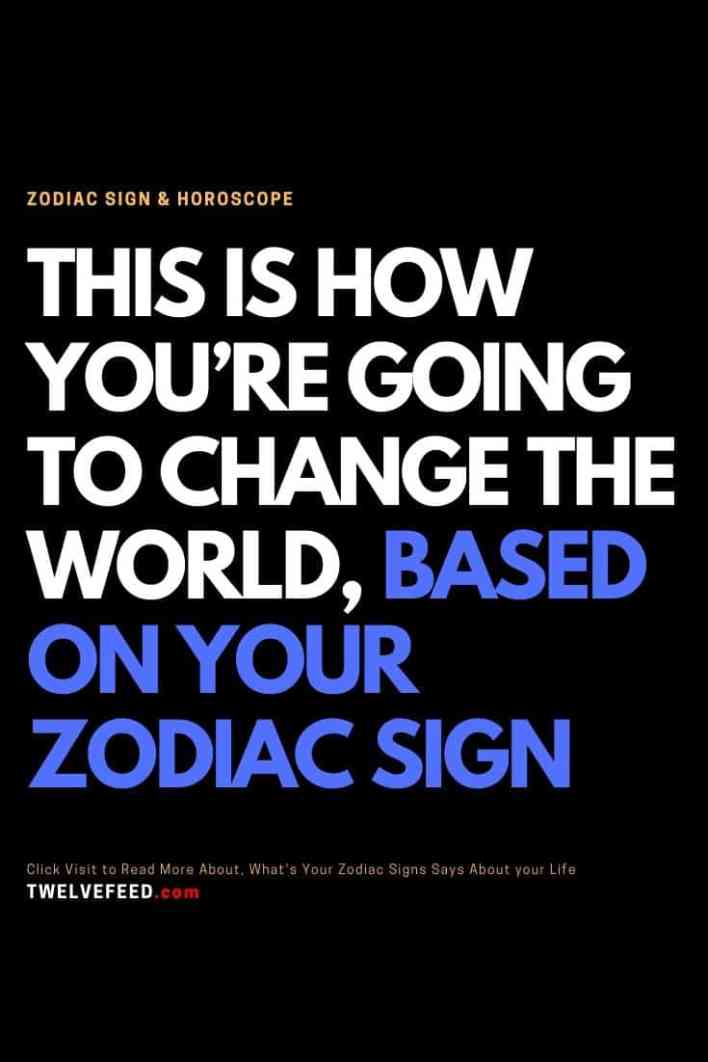 Where Each Zodiac Sign Secretly Wishes They Were Right Now