From Disney movies to chick flicks, we have all been immersed in romantic stories for most of our lives. We all want to find “The One” and live happily ever after. But how do we know if we’ve found that special someone… our soul mate?

The term soul mate gets thrown around a lot these days. Most people use it to describe the person they spend the rest of their lives with. But is it just a human thing, or could it perhaps be more spiritual? Let’s take a look.

The term twin souls is found a lot more in New Age and metaphysical spiritual teachings than in other religions. While a soul mate is more of a “soul friend,” twin souls are literally like the other half of your soul.

Some people believe that our soul was split in half, and so we’re always trying to find the person who has the other part of our soul. Whether you believe that or not is up to you, but here are some signs of twin souls. So, take a look at these signs to see if maybe you’ve found yours.

#1 You meeting might have been totally unplanned or unexpected. You could be happily single. Or even happily taken *or even married*. And you weren’t looking for your twin soul. But suddenly and unexpectedly, you might meet someone, and they turn your world upside down. And you can’t think of anyone else.

#2 You have an immediate feeling like you already know each other. Usually when we meet someone new, it feels like they’re new. It feels like we need to get to know them.

But when twin souls meet, it’s like they have known each other forever. It’s just like catching up with an old friend that you haven’t seen in forever. It’s such a feeling of familiarity. They feel like home to you.

#3 The feeling between you two can be electrifying. If twin souls are romantically attracted to one another, then the energy between them can be electrifying and overwhelming. The power of attraction between the two of them is just unlike anything they have ever known before with anyone else.

#6 You have feelings deeper than you’ve ever had before. We’ve all loved people before. Most of us have also been in love. But when twin souls come together, they are blindsided by the depth of their feelings for one another.

The feelings are almost immediate, which confuses them because most of us believe that love at first sight is impossible. But it’s not impossible for twin souls.

#7 You may become inseparable. If both parts of the twin souls are able to, they will want to spend every waking minute with each other. Their draw to each other, and the power that attracts them, is like a magnet. They have an overwhelming desire to be with their beloved as much as possible.

#8 The relationship is totally open and honest. With twin souls, because they feel so connected and intimate with one another, trust is just easy and immediate. They don’t have a problem sharing their feelings with each other, and they don’t keep anything from the other one.

#9 You could talk to them forever… about anything. As you know, we get along better with some people than others. Sometimes it’s like pulling teeth talking to someone, but with twin souls, they could talk for eternity. And there is no topic that is taboo or off-limits.

#10 You may feel like you share a life purpose. People who believe in twin souls think that they have incarnated into the physical plane to accomplish some sort of life purpose together. Whether it’s getting married and having children or starting a business that will change the world, they have come together into this life to spiritually accomplish something. 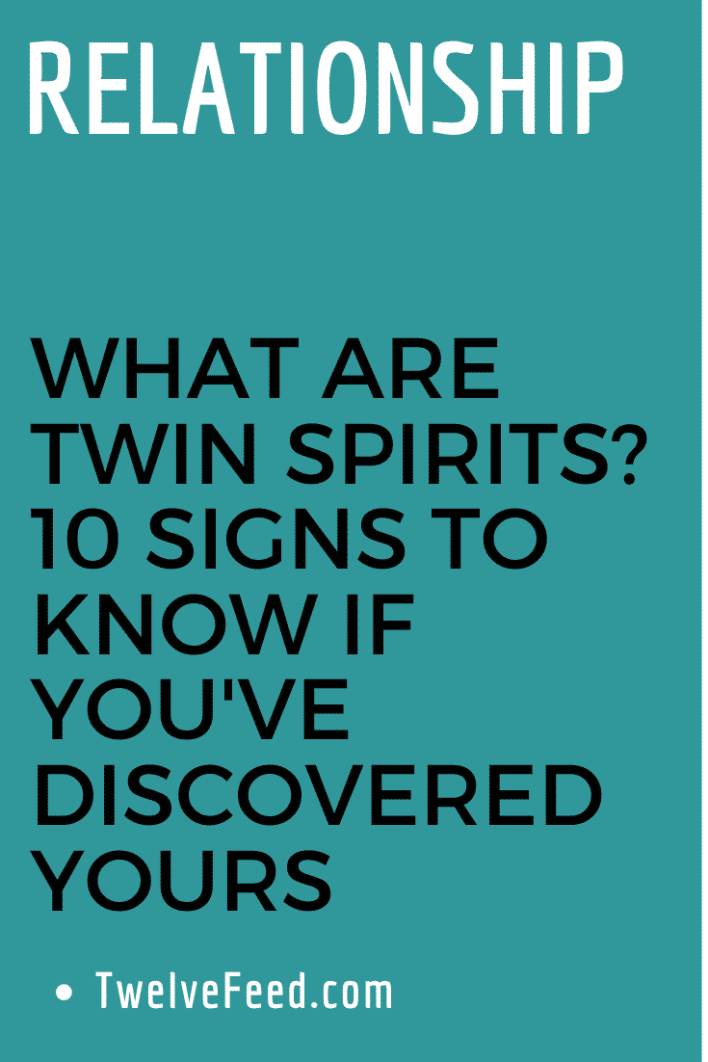