I live in a very diverse town. The school my kids go to houses children from 28 countries and no matter the hour I can walk downstairs to the bar in our building and hang out with people from all over the globe.

As a little social experiment, over the last week, I’ve been asking women from a bunch of different countries what qualities they find attractive in men.

Going up to groups of women and asking them about their preferences was a bit embarrassing at first. Once I got comfortable, however, it turned out to be one helluva conversation starter.

On three occasions I even got some help after someone made an announcement that I was a writer on a website no one knows about here in Spain collecting data on what women want.

This shouldn’t come as much of a surprise, but without a doubt the answer I was given the most regarding what women find attractive in men is nothing.

In fact, looking back on it, I should have asked what women don’t like in men because they sure talked a lot after they said they didn’t like anything.

Maybe I’ll dive deeper into that question on a Friday night when people are drinking more than they’re smoking to get their truth and tongues moving faster.

Until then, in no particular order, below are some of the traits women from my neighborhood in small-town Catalunya find attractive in men every now and again.

I want a man who reads

To avoid the stigma of being the middle-aged American guy going around town asking 18-year-old women what they find attractive in men, I only talked to 30-years old and up. But man, when it comes to that demographic the nerd factor is alive and well in Spain.

Curious, creative, a good conversationalist — it turns out that women don’t just say they like these things, from what I gathered they actually mean it. The bar erupted with cheers when one woman said, “You want to stand out in Spain? Carry a f*cking book!”

Another woman chimed in that the best date she ever had took place when a guy showed up at her house with a bottle of wine under one arm and a board game under the other. Another woman added an additional spark to this conversation when saying, “Most men who read know how to also have a civil argument without raising their voice.”

So I guess the lesson is that most women like wine.

I want a man who isn’t afraid to dance

This one came out after the sun went down but once it was voiced women lit up. A few of them mentioned that a man who can move their hips on the dancefloor tends to also know how to hit the high notes at home as well. But that was to be expected.

Overall, however, I was surprised that a lot of women really didn’t care about how smooth someone is. A lot of women just want a man who is comfortable in their own skin. A man who knows how to have fun and prioritizes laughter over trying to act cool all the time.

So I guess the lesson is a lot of men are doing it wrong.

I want a man who looks good but listens better

After doing some digging and getting past the initial answers of tall, dark, and a fat wallet — which was a bit awkward considering I’m short, pale, and drive a truck that doesn’t have automatic windows — it turns out that a lot of women find listening to be super attractive. And not just the nod your head kind of listening, but the type where you can actually feel it and the person has the audacity to follow-up the next day to see how you’re doing.

My neighbor said it particularly well, “The way my husband talks may have caught me, but the way he listens has kept me.”

So I guess the lesson is most women like to be heard.

I want a man who isn’t around all that much

This answer was particularly popular. After one woman stopped laughing she got oddly serious and grabbed my arm and said, “The best way to have fun together is by not spending a lot of time together.”

Another woman agreed and made an announcement loud enough for the single men around us to hear, “If a man doesn’t have hobbies that involve leaving the house, he ain’t coming into mine.”

When I left the bar that night I don’t think it was a coincidence that two 45-year-old men were trying their hand at skateboarding.

So I guess the lesson is that some women like a man who does his own thing.

I want a man who can make a mean burger

I was told by one woman from Costa Rica that she has an infatuation with any man who can play a musical instrument. The bar erupted, however, when she finished her thought by saying, “But nothing turns me on more than the sound of a man running a f*cking vacuum.”

This triggered a whole slew of comments about how much women enjoy seeing a man embracing domestic duties. Another woman went on to say, “The only thing that heats me up more than my husband wearing an apron is when he tells me there is no need to thank him because he’s just doing his job.” As expected, once again, this was met with thunderous applause.

So I guess the lesson is that women like men who do what they’re supposed to do.

I was nervous to approach groups of women to ask them about what they found attractive in men. But I’m glad I did. It wasn’t as awkward as I thought it would be. We laughed a lot and I ended up making some new friends with both men and women.

Not only that, but I was reminded that trying to figure out what women want is a massive waste of time.

After all, we’re all individuals, and if you’re looking to get on a woman’s radar you’re a lot better off getting to know her and asking her what she wants. 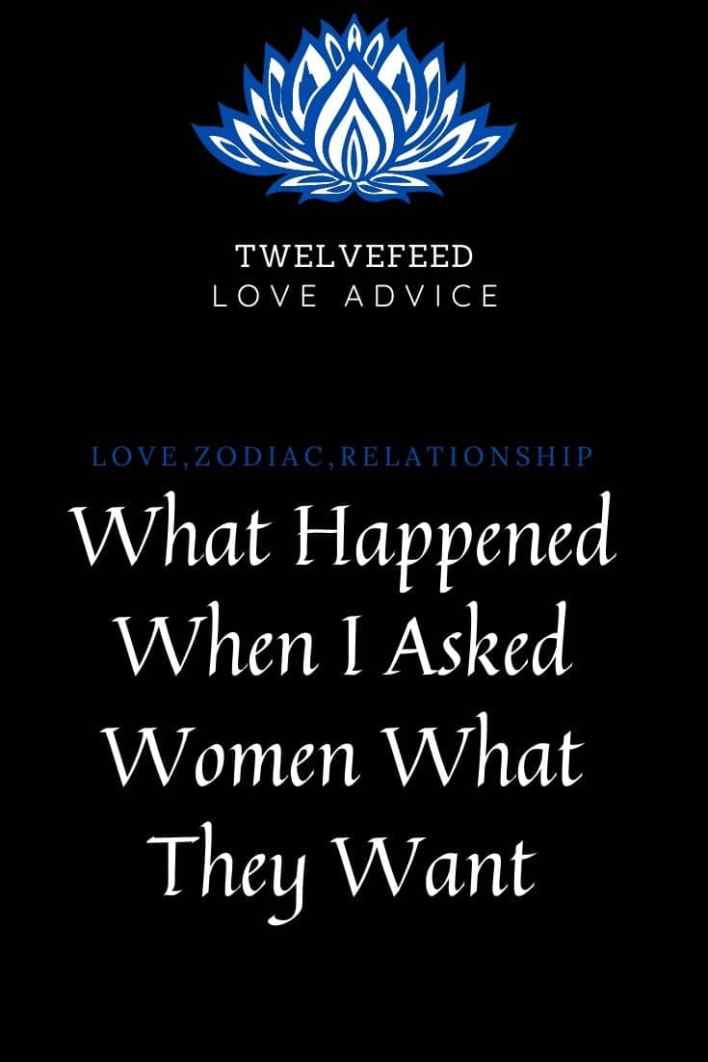