We’ve all seen them. Whether they’re at business conventions, movie premieres, or social events, the stunning female with model looks draped seductively over the arm of a far inferior looking male specimen is something we can’t take our eyes off.

This is the legendary trophy wife; an accessory for successful men since time immemorial. Wherever there is ambition, there the trophy wife will be found. And make no mistake about it; there aren’t many of us guys who would turn down the chance to have one of our own. But why exactly is that the case?

The pros and the cons

There are many reasons why men seek the company of a trophy wife, a woman who is significantly better looking than them; a real ten-out-of-ten on the stunner scale. Yes, this can be due to the simple fact of being able to enjoy the physicality of such a beautiful woman, but there are a number of other reasons, usually linked to games of advantage and one-upping others in their immediate social circle. These are discussed in the first of the two following lists.

There are, however, downfalls associated with the trophy wife and we think it’s only fair that we should discuss these as well. [Read: The 23 kinds of relationships to define your love life]

Why do men desire a trophy wife?

We’re all looking at them as they enter the restaurant, as they step into that classic car, and as they strut down the street looking more than a little pleased with themselves. Is it just that men love the attention of having a beautiful woman on their arm, or is there something more?

#1 The little green-eyed monster. Let’s face it; guys love that first moment when they introduce her to their friends and/or colleagues and their jaws hit the ground in amazement. Soliciting this jealous reaction from others is one of the main reasons that the trophy wife is so popular, with all the petulant joy it brings! [Read: 18 physical traits of a woman that arouse any man instantly]

#2 Professional prestige. Taking along a trophy wife to a professional event is likely to make a boss sit up and take notice. A guy who can have a woman like that on his arm must be a real go-getter, an action man of the highest order. It’s a guaranteed way to get yourself noticed the next time the promotions are handed out.

#3 Blunt tongues. Trophy wives are usually very aware of what they are, and happy to compromise any other principles they may have. Consequently, they are unlikely to challenge and criticize your decisions and opinions in the manner that other women may. This means an easy life guaranteed for the man who doesn’t have much about him. [Read: How to be a sexy goddess who’s desired by all men]

#4 The fast track. It’s not only in your professional life that having a trophy wife adorning your arm works out for the best. Watch locked doors open and queues suddenly shorten as people make an effort to fast track you and your human jewelry down the corridors of life. From airplanes to lines at the nightclub, you will start to glide through life that little bit easier.

#5 You can’t be serious? A trophy wife is undeniably fun. She knows her place in life and doesn’t pretend to be anything else. She’s there to make you look good and feel good and that’s the role she performs. Always the life and soul of the party, she’ll ensure that you never have a dull evening—one way or another!

#6 The mystery factor. There’s nothing more guaranteed to get people guessing about you than the presence of a trophy wife. What are you? A big businessman, a politician, a superstar, a Bond-esque secret agent? It’s all fantastically ego-building stuff. [Read: 25 awesomely bad ways to be a total badass]

#7 Young at heart. It’s probably fair to say that the trophy wife is usually found upon the arm of a gentleman significantly older than herself. And there is something significantly rejuvenating about spending personal time in the company of a younger, beautiful woman. As they say, you’re only as old as the woman you feel! [Read: Why men always fall for the damsel in distress]

So what’s the catch?

Unfortunately, it’s not all fun filled nights of champagne and jealous stares. Having a trophy wife in your life also has some significant downsides.

#1 Deep pockets required. The most obvious disadvantage to a trophy wife is that if you’re going to run a Ferrari, then you have to pay a great deal more in maintenance. Trophies don’t come cheap, and an occasional wallet-saver dinner at the local burger joint is never an option. For this lady, it’s swanky restaurants and catwalk accessories every step of the way.

#2 Till death do us part? Trophy wives will tend to stick with someone who lavishes enough attention on them, but only until the next richer and better-looking option comes along. Be prepared to be ditched for a newer, more extravagant model. And trust me, she won’t think twice about making that change. [Read: The 7 kinds of women who will end up just wasting your time]

#3 Dangerous liaisons. Being a perfect 10, she can get any man she wants—and that magazine centerfold stud that strolled into the bar is going to walk away with her telephone number at the end of the night. Infidelity is the curse of any trophy wife relationship.

#4 Something missing. If there’s more to you than your acquisition of a trophy wife would suggest, you’re going to find the relationship very unfulfilling very quickly. They aren’t renowned for their scintillating conversation and you may just find yourself pining for a woman who knows her own mind.

#5 Beating the cliché. If you are the typical older man in this relationship, then expect the whisperers to engage in conversation at every opportunity your turned back presents. The rumormongers will be calling you every creepy old man epithet under the sun, and this isn’t really the ideal way for people to get to know you—in any arena. [Read: 10 sneaky signs you’re dating a 24K gold digger!]

#6 Raised eyebrows. Not the kind she gets every time she goes for her refreshing syringe of Botox, but the kind your friends display when she attempts conversation at the restaurant. If she’s not the greatest of conversationalists, prepare to be embarrassed!

#7 Accumulative stress. With all the embarrassments, worries and expenses of maintaining a trophy wife, is it actually worth having one? That is of course for you to decide, but there aren’t many men who manage such stresses without significant aplomb.

It’s no coincidence that many men who marry trophy wives end up with different women later in their lives. It’s exhausting, expensive and mentally draining to manage a trophy wife—with no real guarantee that she’ll stay with you in the end.

[Read: 15 signs a girl is high maintenance and not just a trophy wife]

Some men, however, still love the prestige that a beautiful woman affords. If that’s you, then go ahead and search out your particular piece of human jewelry. Just make sure you’re ready for the pitfalls too. 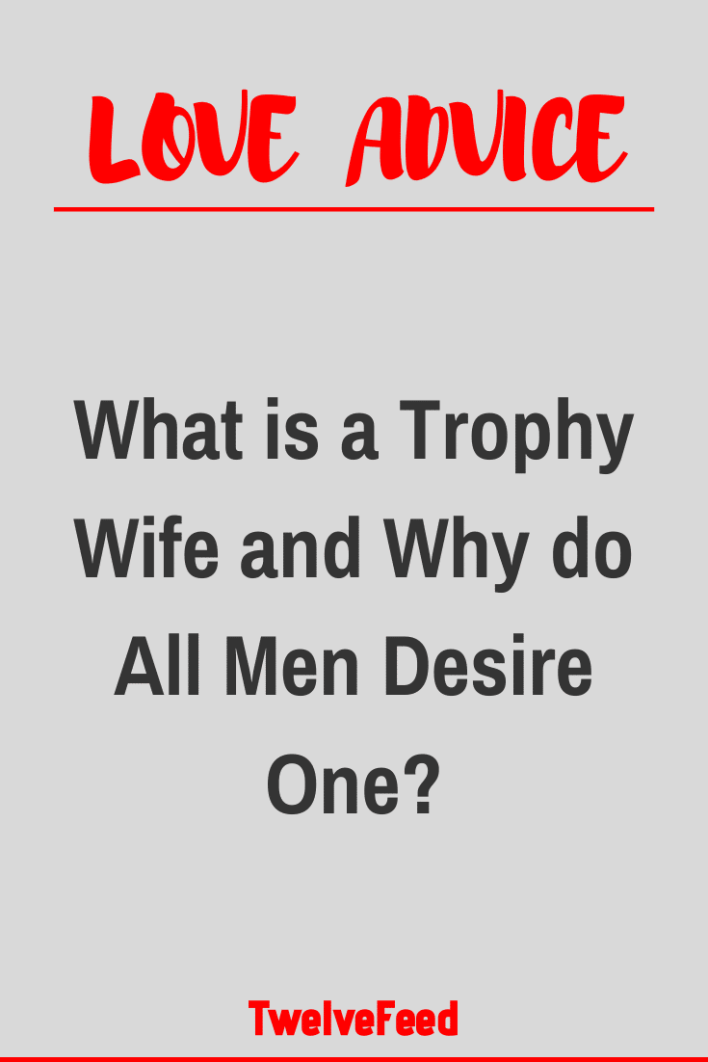 Zodiac Signs Who Are Likely To Disappoint Their partner

How to Know When to End a Relationship – 12 Subtle Signs