What does every good fairytale have? A white knight, of course. The white knight is the man who shows up at the end to save the day, makes the hurt go away, and whisks the damsel in distress away from the horrible situation she finds herself in. It is no wonder every girl grows up dreaming that somewhere out there is her version of the white knight. But what happens when a guy plays the white knight syndrome?

As time goes on, what women realize is that there is no such thing as a white knight. Some guys protect you more than others, but they are all human and fallible. Sometimes, when you need them most, they can be found in a bar trying to drink you away….

There are some guys who grew up with the same ideation of what a relationship entails and consider themselves to be the white knight put on earth to save a woman from the darkness she finds herself in.

If you are a guy who thinks it your duty, no wait, your obligation, to save a woman from either the bad situation she finds herself in, or, possibly even, from herself, it might be time to look at what you get out of it.

There is often a presumption on the part of the white knight that their actions are purely altruistic, but that isn’t necessarily true. For the white knight, if he wasn’t gaining something in the mix, why would he continue to put himself in harm’s way?

Love is a pretty powerful tool. It isn’t always the only thing that drives a white knight to come to the rescue, even at his own, or the damsel’s, demise.

Before you think you are sacrificing yourself and doing someone else a favor, figure out what is driving you to be the knight in shining armor, selflessness or selfishness?

#1 You want her loyalty forever. The white knight knows that if he slays the dragon and saves the princess, she will be forever grateful and “owes” him her life forever.

You might have the white knight syndrome if you try to gain unconditional love through your acts of valor instead of through true love. Saving her is awesome. Doing it so she will be indebted to you forever, isn’t so awesome.

#2 You need to have the upper hand. A white knight knows that once he shows his dominance, the damsel forever sees him as her protector. But, sometimes he wants more. Sometimes the white knight is looking for more power over her.

If you save her from something horrible, then you show her how “powerful” you can be, and put her in a submissive position.

#3 You want to be seen as “the good guy.” Sometimes the white knight sacrifices it all, not for the love of the damsel, but to show the townspeople how amazing he is. It isn’t about the love he feels for the woman he saves. It is more about the recognition and adoration he gets from everyone around him.

Being the guy who sweeps in and saves someone elevates you to a pretty big stature in a community, whether you do it intentionally or not. Adoration is pretty powerful.

#4 You are just as dependent on her as she is on you. There are times when the white knight saves the damsel because, without her, he would be lost forever. Fairytale romances rely on two characters, not just the damsel but the knight too.

There are times when men try to save unsalvageable women because they need them just as much as the damsel is needed. Co-dependent relationships aren’t about saving anyone; they are about dragging both down.

If you see she needs saving, and you just hang on because you can’t be without her, then you aren’t a knight. You are a co-conspirator of her bad behaviors. If you aid her in ways that you think help but are really only fostering her and keeping her stuck *i.e., cleaning up her mess*, that isn’t saving, that is helping to drown.

#5 You enjoy the sympathy. Some people live off the sympathy of others because it negates them from any responsibility. If you stick by a woman in a bad situation who continually puts herself there, then you aren’t there to save her, you are there to cry “poor me.”

If you tried to bring her out of it and aren’t able, but just run around trying to elicit sympathy by telling everyone how much you care and tried, consider the possibility that it doesn’t really have anything to do with her at all. It might be all about you needing attention and people to feel sorry for you.

#6 You are all about self-sabotaging. Self-sabotaging is a way we make choices knowing we fail and then saying, “See I knew it was going to fail.” If you have the white knight syndrome and this isn’t your first rodeo or chance at saving someone, then you might want to think about whether you enjoy sabotaging yourself for some reason.

We sabotage our own happiness for many reasons. What is it that you gain by setting yourself up in a situation where failure is the only result available?

#7 You couldn’t save someone in your past, so this is your second chance. Sometimes we grow up in families where we watch people we love destroy themselves, and we aren’t able to save them. That sets many adults on a path to right the wrongs of their childhood.

If you had an alcoholic mother or a drug addicted father, you might be trying to save someone to undo the past and the lack of control you had before. But you can’t ever save someone who doesn’t’ want to be saved. Not when you are a child and not when you are an adult. Saving someone isn’t your duty, it is their job.

#8 You grew up watching a co-dependent relationship. If you grew up with parents who had a similar relationship where one always saved the other, then that is probably all you know.

#9 You are a narcissist who thinks it is your duty to make things “right.” Sometimes a man has the white knight syndrome because he believes it his duty to morally protect and guide everyone because he is perfect.

If you save her just because you think you are the only one in the world who can, you’re that perfect, then maybe consider she doesn’t want to be saved. It isn’t your duty.

#10 You want her to be dependent on you. If you are the one who saved her, then she owes you her life forever. And, you are the only one capable of not only saving her, but keeping her safe. If you think if you save her once, she will forever be dependent on you, you’d better think about whether that is the type of relationship you want with someone. 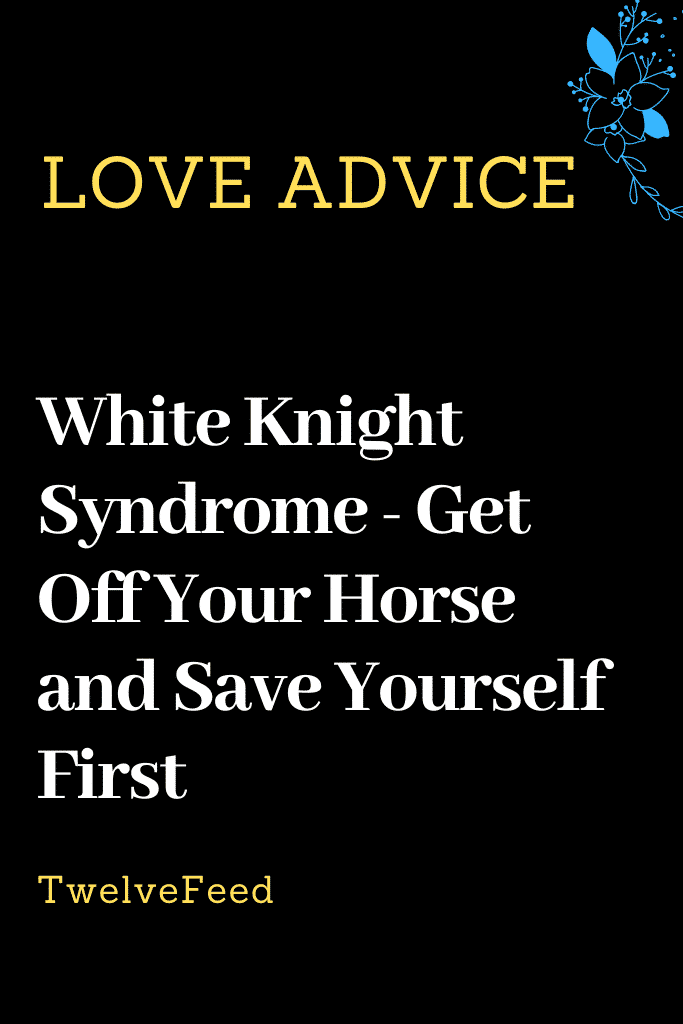 Strolling Down the Aisle - 10 Questions for a Happily Married Life

Not Intrigued in Dating? Why It's Typical to Feel This Way