For the most part, women are way more talkative than guys. Sure, you’ll get the occasional dude that just can’t shut up. But more often than not, it’s the women who can’t stop talking. There are a lot of reasons why women talk so much and some of them you may already know.

Women are very expressive people. There are definitely a few who are shy and quiet, but even when you get to know those women, they open up and are very talkative. You may think it’s a matter of personality when it comes to talkative women, but it’s much more than that.

Why men should listen to their women

I know your girl probably talks way more than you want and even more than you can listen to. But there are a lot of reasons you should pay attention to what she says. Women may talk a lot, but men are the ones who still don’t listen.

Why do women talk so much?

We’ve established the difference between men and women. Now it’s time to discuss why women talk so much in greater detail. Did you know that women actually talk up to three times as much as men? It’s true!

While many of you guys may be reading that and thinking, “well duh,” most people don’t know that for a fact. But how come women spend so much more time talking than men? We have the answers.

#2 We’re more expressive. Women are just more expressive in general, too. While men tend to keep to themselves and have their emotions hidden inside, women let them out and aren’t afraid to show them.

This means no matter what a woman is feeling, she’s more likely to express it. And since a human’s biggest way of expressing themselves is through speech, it definitely makes sense that this is why women talk so much.

#3 We’re trying to get men to talk. The thing about the differences in men and women is that we don’t always understand each other. For that reason, women will talk and talk until they get a guy to say something.

#4 We externally process information. Men process their emotions and information within their own head. That’s why us women think guys don’t have many emotions. It’s not that they don’t, it’s just that they process them internally.

Women, on the other hand, prefer to process their feelings and information outside of their minds. This leads to women talking a lot more than men do in order to make sense of certain things.

#5 Because we’re trying to get men to listen. If you want your woman to stop talking so much, then you should listen to her better. Because one of the main reasons women talk so much is to get a man to listen to them!

To do this, we often have to talk a lot just to let you know what’s going on and how our life is. So don’t get annoyed with this reason why women talk.

What to do when she just won’t just shut

Sometimes you just really need a break. Since women do tend to talk up to three times as much as guys, you’ll need to know what to do when she gets out of hand.

#1 Don’t freak out and get mad. The problem with doing this is that women aren’t really doing anything wrong. We can’t tell that you’re annoyed or nearing your limit of our babble.

You have to – shocker – communicate that. Getting mad will only make things worse and she’ll then go on to chatter about why it was inappropriate to get angry with her.

#2 Make sure she knows ahead of time that you’re not in the mood to talk. If you’ve had a rough day at work and you just want to come home and chill, send her a quick text. All you have to say is that your day wasn’t all that great and you’d like some quiet time when you arrive. That’s all!

#3 Calmly tell her you need some “you time.” If that doesn’t work, just calmly communicate that you just want some “you time” and to be left alone for a bit. Make sure she knows that it has nothing to do with her and you’re just not feeling super social.

#4 Never ignore her. If you think ignoring a girl will make her shut up, you have things backward. This is the worst thing to do because she’ll just keep talking and talking until you acknowledge her. When she figures out that she’s being ignored, it’ll only fuel the fire and make her want to talk your ear off even more.

#5 Determine what she needs from you through the conversation. When she’s been talking for a little while, you should have a pretty good idea as to why she’s talking to you so much about something. 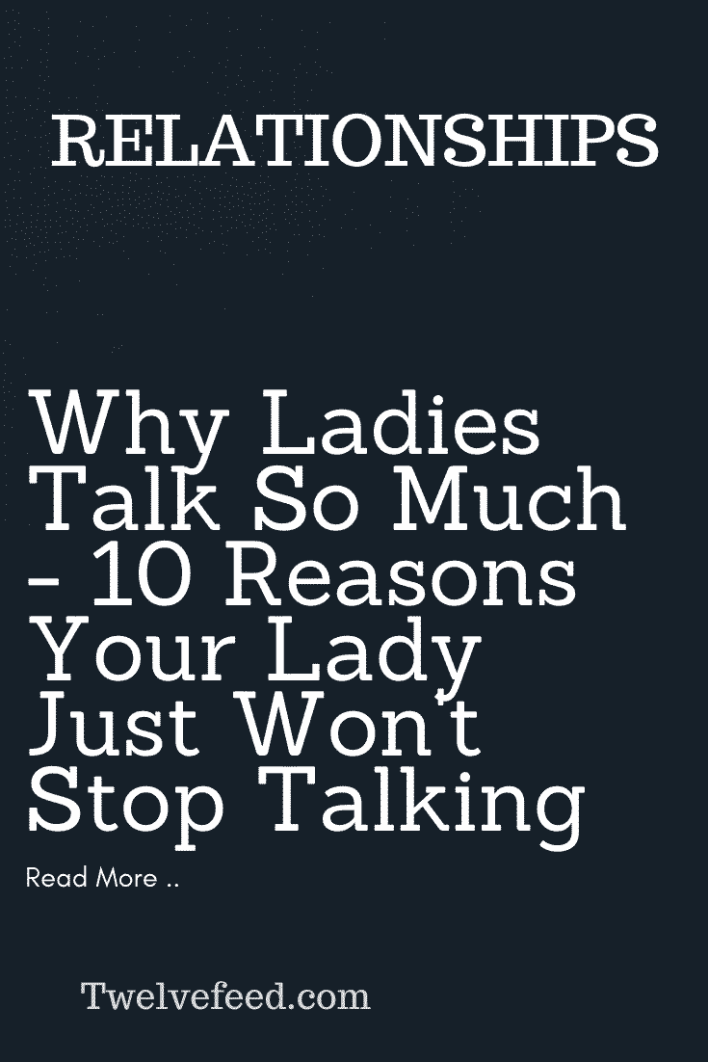