Women feel insecure about their appearance.

Men feel insecure about their masculinity.

And neither gender really understands why the other gender makes such a big deal of it!

But if you’re wondering why a man feels emasculated around you, or what you’ve been doing to emasculate him, well, this is something you need to know.

Why do men feel so emasculated?

A man’s ego is one of his biggest assets.

And if he ever feels like his ego is getting bruised or battered, whatever the reason may be, he starts to feel less like the man he thinks he should be.

And that’s when he starts to feel emasculated.

[Read: 20 secret things about guys that your guy would really want you to know!]

Emasculation is the loss of masculinity and power.

And when a man loses the one thing that defines him, his masculinity, he’d either withdraw into a shell, or he’ll get rebellious and do anything it takes to get that masculinity back.

Before we go any further here, you need to understand this. It’s not your fault your man feels emasculated. Most men wrongly blame women when they feel emasculated. And some women believe they should be subservient to their man or they’d emasculate their man. But that’s just not true.

A man feels emasculated because he chooses to feel emasculated. It’s all in his head.

Should a girl dumb herself down to avoid emasculating her man?

If your man sees you as an equal and respects you, he should learn to accept that you’ll always be better than him in some *if not all* things. [Read: Why a girl should never dumb herself down to impress a guy]

Dumbing yourself down or downplaying your own achievements just to make your man feel more manly may work for a while, but it’s not the answer. The man who feels good about himself only when his woman behaves like his slave isn’t suffering from emasculation. He’s suffering from low self esteem and probably has controlling tendencies.

And he’s the kind of guy you definitely need to stay away from! [Read: 21 subtle yet shocking signs of an emotionally abusive partner]

The real issue – Men emasculate themselves all the time!

The real reason why guys feel emasculated is because of themselves and the world they live in. All guys have high expectations from themselves because society and television coerces them into believing that real men should behave a particular way.

A man who whines about his shitty day feels less like a man because society tells him real men don’t whine or appear helpless, especially in front of their girlfriend or wife. A real man broods in a dark corner and looks cool doing it!

Real men are supposed to have all the answers. Real men are always winners. Society and television portrays real men in a manner that’s almost unmatched by mortal men. When a man cries, everyone thinks he’s a sissy *even if they feel bad for him at that moment*. [Read: 15 reasons why nice guys always finish last all the time]

The constant pressure on a guy from all around him to behave more like a real man emasculates him all the time.

James Bond. You won’t ever catch him slouching in a dingy bar with a glass of beer in his hand, dirty and unshaven, talking about how terrible his day was. And men believe that. Men believe real men don’t have weaknesses or pitfalls. Men believe they can’t appear weak or have flaws because that would only make them less of a man.

Don Draper, the coolest mad man in New York, is another real man. He barely has conversations that last more than a few seconds, and still has a social life. He drinks and smokes like he’s immune to bad health. And every time he opens his mouth, he just knows the right thing to say at the right time. And your boyfriend or husband, well, he can’t think of those perfect lines even if he spends a while plotting over the right thing to say.

Iron Man. Genius. Billionaire. Playboy. Philanthropist. Your guy may smile as Iron Man utters each word on the big screen. But every word in that quote makes your guy’s testicles subconsciously shrink just a little bit more. Because he can never be Tony Stark, the real man, the way a man should be.

We’re surrounded by fictitious men that everyone loves and admires. And that clearly means something, that those fictional characters are actually the real men, while the men we see and interact with in real life are all inferior mortal men. Well, at least, that’s how men feel. [Read: 30 facts about guys that can help you read your guy’s mind]

If these fictitious men emasculate men, it gets worse for guys. Even women like these kinds of powerful men! And each time a guy hears his girlfriend talk about a powerful man or how awesome a movie character is, a guy can’t help but subconsciously assume he’s not good enough.

A guy’s idea of a real man

Men want to feel like they’re in control. All guys admire men who speak sharply, who yell at others and seem totally in control of the situation all the time. And every time a guy can’t be that perfect vision of the man in his head, he feels emasculated. And the worst part is that most guys believe they can’t do anything about it! [Read: How a guy can become a better guy by using a role model]

Men, women and our insecurities

And of course, it’s a lot easier to point fingers at someone close than point out to the television screen. Maybe the best way to deal with insecurities and emasculation is by working together and becoming better individuals together, instead of arguing with each other or stopping each other from admiring the opposite sex. [Read: How to get rid of your man’s wandering eye]

What makes a man feel more like a man?

There are just three main qualities that make a man feel manlier and less emasculated. As long as a guy gets or feels one or all three of these qualities, he’d immediately feel more like the man he dreams of becoming.

#1 Sexual attention. Virility is a big sign of manliness.

#2 Strength. Displaying his strength and masculinity always gives a man a high.

#3 Power. Ever heard of a rich and powerful guy feeling emasculated? [Read: Why do men cheat? – 3 big reasons and 27 more!]

Every man wants to feel like a real man. And he goes about pursuing something in the hope of feeling more manly and real. But at the end of the road, almost always, it comes down to just these three qualities that arouse the inner real man in him.

So if a man gets to have more sex, feels stronger, and feels rich and powerful, he’d feel more like a man. And that’s all there is to masculinity.

How to make your man feel less emasculated

If your man feels emasculated, all you need to do is help him achieve these three qualities.

#1 Sexual attention. Enjoy an active sex life and try something new in bed every few months, just when something in bed starts to get boring. As long as both of you get creative in bed and he’s able to bring you to orgasm, he’d feel manlier and more proud of his little buddy. And a good sex life definitely means a better relationship! [Read: Top 50 kinky sex ideas to make sex a lot naughtier and sexier!]

#2 Strength. Ask him for his help around the house, especially if it’s something that involves a display of strength like fixing something or opening a tight jar. Work out together and try to look attractive for each other.

Give him a chance to feel like a man by behaving like a lady when both of you head out on a date. It’ll subconsciously bring out the chivalrous male in him, which will make him feel more like a man. [Read: 10 effortless tips to be a lady and awe her man and everyone else]

#3 Power.  Power is the opposite of helplessness. And a man will feel emasculated only when he feels helpless, like he has no control or say in the relationship, or in his life. Women are more self reliant and self sufficient today than ever before. For the first time, many men don’t have any control over their lives, their relationship or even the food they eat!

Split responsibilities in the relationship, and motivate each other to achieve milestones and goals in life. The ambitions could be small and insignificant to be begin with, but over time, each achievement would instill more confidence in your man’s life. And that would help him feel a sense of control and power in his life. [Read: 20 signs the control freak in you is emasculating your man!]

Help your man but don’t downplay yourself for him

A guy may feel just a wee bit emasculated now and then for different reasons, be it a powerful woman or a really powerful alpha male. But all said and done, there’s a thin line between feeling occasionally emasculated and overly emasculated because of an insecure personality. [Read: Why dating an insecure guy could be the biggest dating mistake you make!]

A guy who feels emasculated all the time would feel like a failure no matter what you do. And he’ll always blame you for his insecurities and his failures, even if you help him in every step along the way.

After all, you can help him become a better man by helping him remember his own achievements and by motivating him to be a better man. But you can’t change his attitude unless he decides to change it.

[Read: How to stop selfish and insecure people from hurting you]

The world is unfair to a man and his emasculation woes, just as it is unfair to a woman and her insecurities about appearances. But a real man doesn’t shrivel in his shorts when he faces the threat of emasculation. He grows a pair and rises above it! 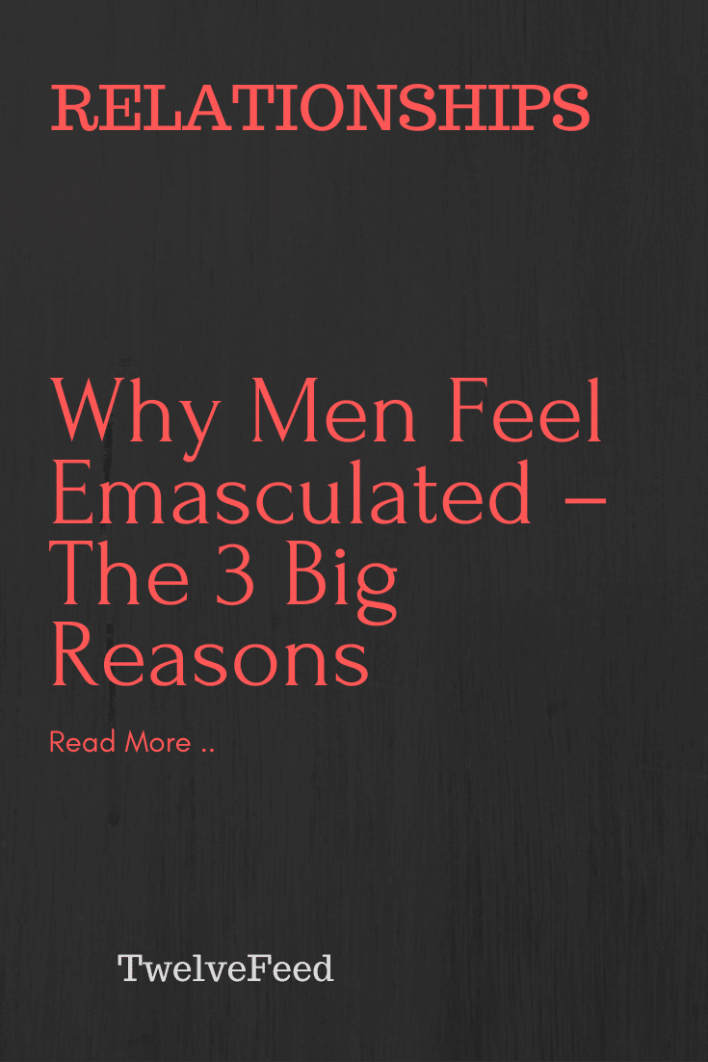 21 Big Signs of Emotional Abuse You May Be Overlooking