Birth control has been around for a very, very long time. Mostly because a lot of people really, really don’t want to have a child when they’re not ready or because they just never want kids at all. Since it’s been around so long, you’re correct in assuming there are many different types. I’m sure you know many different forms, and the most lazy one you’ve probably heard about is the withdrawal method.

Better known as the pullout method, this is when guys pull out of the girl right before they’re about to finish, so they don’t risk getting any of their fertile soldiers near her fertile pieces.

The oldest forms of birth control

Now, the withdrawal method began when people realized what was actually making women get pregnant. Before that, people used all sorts of odd contraptions to stop conception. And to be honest with you, they’re a bit scary.

Lemon juice—once believed to have spermicidal properties—soaked sponges were inserted into women in order to block the cervix.  Animal membranes were also used. They actually looked like modern-day condoms and functioned the same way. Many women also ate a variety of herbs that altered their hormones in ways that made getting pregnant extremely difficult.

How reliable is the withdrawal method?

But that begs the question, if they had those different devices to prevent pregnancy, pulling out must not have been very effective. Since it only required a man to yank it out pre-bust, it should’ve been used more often than hormone disrupting herbs, right?

Well, that’s what I’m here to answer. If you’ve been using the pullout method and wonder just how safe you’re being, these facts help you decide if you should opt for another form of birth control.

#2 It’s widely preferred by men than women. This is for obvious reasons. Women prefer to be on the pill or other forms of hormonal *or the non-hormonal IUD* than to trust a man to pull out when he should. And it feels much better for the men to go bare than to wear a condom. This is usually the reason couples use this method over putting on a condom.

#3 It has a 4% failure rate when used perfectly. That means when the couple pulls out perfectly—before the male goes off—every single time without failure, only 4% of couples get pregnant within the year. Now, that doesn’t sound too bad considering you’re not using any other form. But that’s not really a realistic number.

#5 It’s the worst method to use. Out of all the methods considered contraceptives, it’s by far the worst one. Now, if that’s rather surprising to you, it shouldn’t be. Why? Because you’re not actually doing much to prevent pregnancy in the first place. You can’t really just yank it out and call it birth control.

For comparison, the most effective contraceptive is the IUD with less than a 1% failure rate. Not only can this form be used for up to 10 years depending on the type you get, but you can also go condom-free, just like the withdrawal method.

#6 But it’s one of the most common. Because it’s completely free and non-hormonal, this is one of the most common forms of birth control. It’s typically used by longer-term couples who know where each other’s genitals have been *so they don’t get STDs*. Despite its ineffectiveness as a whole, couples tend to lean toward it because of the benefits.

The problems with pulling out

As you can imagine, using the withdrawal method comes with a few issues. Here are all the problems with pulling out than not everyone thinks about when they’re in the mood to get frisky.

#1 It’s not always controllable. Some guys may boast about their ability to control themselves before they finish, but let’s be real. Not all of them are going to be able to pull out in time. When you’re feeling that good, it’s not going to be easy to tell when you’re about to finish and get completely out in time.

#2 Precum isn’t avoided this way. Precum is the clear liquid that comes out of the guy when they start getting aroused. Basically, the purpose of this stuff is to clear out their urethra so everything else can get out when needed. And there is a good chance that live sperm may be present in this fluid.

#3 It doesn’t protect against STDs. This should be a given. Without a condom, you’re not protected against STDs when you use this method. And if you’re someone who’s not looking to get pregnant, you’re probably not going to want to get an STD, either. Some can be really dangerous and effect fertility later on.

#4 It’s not all that effective. As I’ve mention above, it’s just not that effective. For couples who really, really don’t want to have a baby, it’s horrible for them to use because it’s so ineffective. Sure, some couples have success using it, but they almost always use another form of birth control in addition to it.

#5 It increases anxiety about getting pregnant. Most people who use this method understand it’s not exactly the most effective. Therefore, they’re a little nervous about getting pregnant every time they use it. This makes s*x less pleasurable because you always have that fear in the back of your mind.

Not to mention how nervous it makes you when you realize you didn’t get out as fast as you’d have liked. 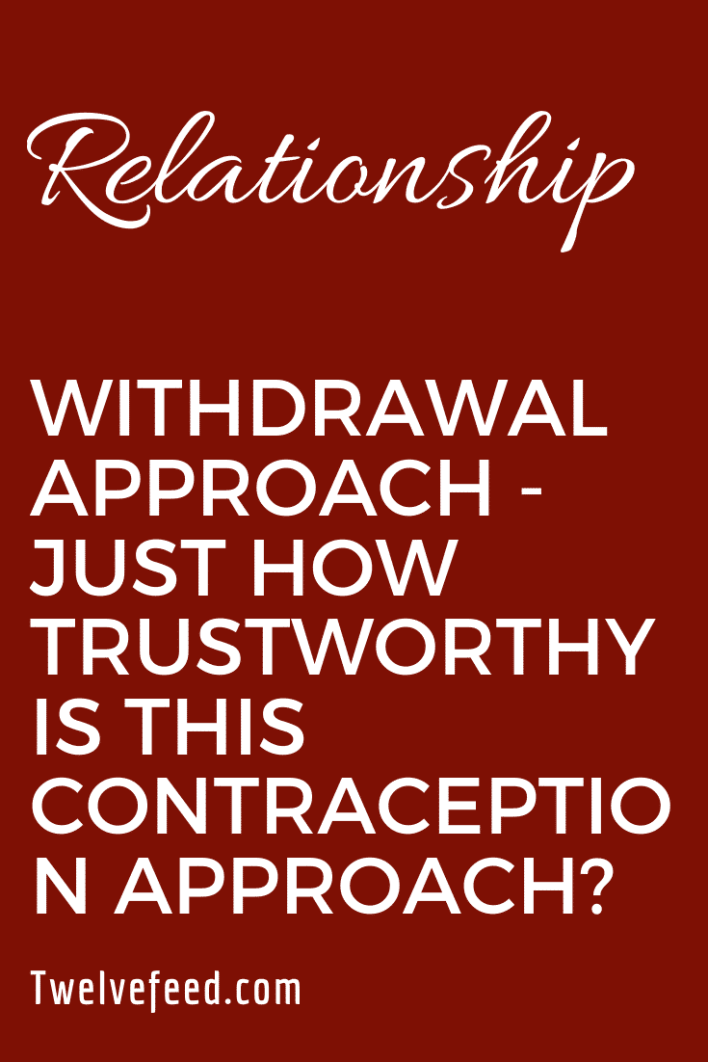