Astrology doesn’t appeal to everyone, and some might think that there’s no way that it could predict things that happen in your life or help you see someone more clearly. But even if you don’t want to get too into the zodiac, you can’t deny that everyone acts a lot like their sign. When you ask someone what their birthday is and know what their sign is, it’s a huge help and you feel like you really “get” them.

Here are some things to know when you’re dating someone who is an Aquarius sign. Read on to find out about five good and five bad habits that they have when they’re in a relationship.

If you date an Aquarius, they have one really good relationship habit: they want to have “intellectual conversations.” Bad date stories are so varied and can be so unique to each person, but one thing is for sure: most people have had the experience of going out with someone who couldn’t stop talking about themselves. It’s enough to make you stare longingly at the door of the restaurant, wanting to leave.

You’ll be glad to know that when you’re in a relationship with an Aquarius sign, they can have a real, intelligent discussion with you.

9Bad: They Might Not Tell You A Lot, Leaving You Guessing

Aquarius signs are said to be “shy and quiet” which can be a problem in a relationship. They might not tell you a lot and leave you guessing about how they feel about something or what they really think.

Of course, not everyone needs to share their every thought and opinion (that’s what makes social media kind of tough sometimes) but you do want your partner to talk to you. Communication is a big deal.

Aquarius signs are “humanitarian” and that makes them very caring people. When they’re in a relationship, they will always act kindly toward their partner and be interested in their well-being.

You’ll definitely know that you’re dating an Aquarius when they talk about other people not to gossip about them but to say sweet things about them or hope that they’re happy.

7Bad: They Can Seem Like They’re Unhappy With You

Aquarius signs have a tendency to be “aloof” so this is definitely a bad relationship habit to have. Even though you know that they love you and that they want to be with you, you might notice that they have a bad attitude from time to time.

Because they can act like they’re annoyed or upset, you wonder if something is wrong, but this is just part of their personality.

6Good: They Can Handle Being on Their Own

An Aquarius sign’s independence is one of the best things about them, and the fact that they can handle being on their own is really nice. If you want to go for dinner with a friend or host girls’ night in at your apartment, they’re totally fine with that and would never say anything negative.

Since some people can be a bit needy in a relationship, it’s really good when someone doesn’t mind staying home one night while you go out. That’s how you have a healthy relationship.

5Bad: They Need A Lot Of Time Away From You

While it’s good that an Aquarius can be alone, it’s not so good that they always need “space and freedom.” They need a lot of time away from the relationship so they can be by themselves.

After a while, you could wonder if they even want to stay in the relationship since they want so much space. They’re used to asking for this space whenever they want, so that could be an issue if you want to spend more time with them and they say that they need a few nights alone.

4Good: They Let You Be Who You Are

You’ll know you’re dating an Aquarius when you notice how “open-minded” they are. They want to get to know people and they don’t want to assume things about them. Everyone could be a bit more like an Aquarius in this sense because it’s a much better attitude to have.

They’re in the habit of letting you be who you are, which will be a breath of fresh air.

3Bad: It’s Hard For Them To Do Things Your Way

Aquarius signs are “stubborn” and that’s not the best relationship habit to have. Instead of being able to understand why you want to do something, they could insist on sticking to their original plan.

If no one has called them out on it, this could be a habit that they bring to every new relationship. They might not even think twice about it.

Another good relationship habit of Aquarius signs? They’re really smart and since they have a tendency to find many situations dull, you’ll notice that they make sure that they’re living a life that matters to them and that they find exciting.

Since they can find a situation boring if they’re not thinking, learning, or otherwise getting their brain active, they could work hard at always finding interesting things for the two of you to do. Maybe they’ll want to go to various talks or events so you can have a date night but also learn something new.

1Bad: They Take A While To Open Up

Aquarius signs are said to have trouble opening up to people and they don’t view many people as being completely trustworthy. Like some of the other habits on this list, they could bring this one into their latest relationship, and it could be really tough.

Once you know that they’re having difficulty, you could talk to them about how they can tell you anything and everything. It could take some work for both of you but it’s possible to understand them better and continue dating. 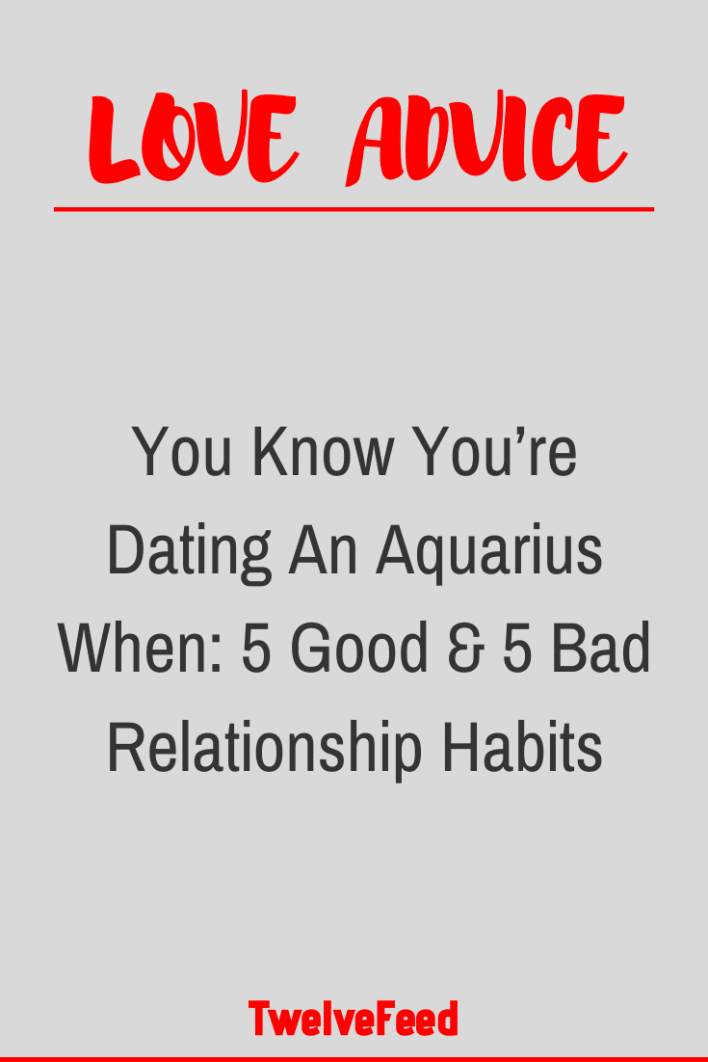 10 Subtle Red Flags That Suggest A Guy's Stringing Her Along

10 Things Every Boyfriend Hears When Shopping With Their Girlfriend